Whiplash: How to Survive Our Faster Future (Paperback) 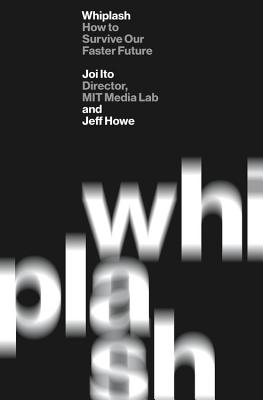 This "brilliant and provocative" (Walter Isaacson) guide shares nine principles to adapt and survive the technological changes shaping our future from the director of the MIT Media Lab and a veteran Wired journalist.

The world is more complex and volatile today than at any other time in our history. The tools of our modern existence are getting faster, cheaper, and smaller at an exponential rate, transforming every aspect of society, from business to culture and from the public sphere to our most private moments. The people who succeed will be the ones who learn to think differently.

In Whiplash, Joi Ito and Jeff Howe distill that logic into nine organizing principles for navigating and surviving this tumultuous period:

Filled with incredible case studies and cutting-edge research and philosophies from the MIT Media Lab and beyond, Whiplash will help you adapt and succeed in this unpredictable world.

Joichi "Joi" Ito has been recognized for his work as an activist, entrepreneur, venture capitalist, and advocate of emergent democracy, privacy, and Internet freedom. As director of the MIT Media Lab, he is currently exploring how radical new approaches to science and technology can transform society in substantial and positive ways. Ito has served as both board chair and CEO of Creative Commons, and sits on the boards of Sony Corporation, Knight Foundation, the John D. and Catherine T. MacArthur Foundation, The New York Times Company, and The Mozilla Foundation. Ito's honors include Time magazine's "Cyber-Elite" listing in 1997 (at age 31) and selection as one of the "Global Leaders for Tomorrow" by the World Economic Forum (2001). In 2008, BusinessWeek named him one of the 25 Most Influential People on the Web. In 2011, he received the Lifetime Achievement Award from the Oxford Internet Institute. In 2013, he received an honorary D.Litt from The New School in New York City, and in 2015 an honorary Doctor of Humane Letters degree from Tufts University. In 2014, he was inducted into the SXSW Interactive Hall of Fame; also in 2014, he was one of the recipients of the Golden Plate award from the Academy of Achievement.

Jeff Howe is the program coordinator for Media Innovation at Northeastern, and an assistant professor at Northeastern University. A longtime contributing editor at Wired magazine, he coined the term crowdsourcing in a 2006 article for that magazine. In 2008 he published a book with Random House that looked more deeply at the phenomenon of massive online collaboration. Called Crowdsourcing: How the Power of the Crowd is Driving the Future of Business, it has been translated into ten languages. He was a Nieman Fellow at Harvard University during the 2009-2010 academic year, and is currently a visiting scholar at the MIT Media Lab. He has written for the Washington Post, the New Yorker, the New York Times, Time, Newsweek, and many other publications. He currently lives in Cambridge with his wife and two children.

"WHIPLASH remarkably, entertainingly, and, most importantly, optimistically gives critical context for the exponential evolution in which we find ourselves, then provides a path toward adaptability and flexibility. In short, it's a badass read."
—J. J. Abrams

"This book is a brilliant and provocative guide to reading the tea leaves of technological change. It's a great mix of stories, analysis, and practical tips. Read it or get left behind."—Walter Isaacson, bestselling author of Steve Jobs and president and CEO, Aspen Institute

"Earnestly followed, their nine principles will promote fluidity, exalt hybridity, make our brains receptive and elastic, in other words prepare us to navigate our present and grow our future."—Paola Antonelli, senior curator, Museum of Modern Art

"This book is an essential and pragmatic guide to navigating our technologically accelerating future. Joi and Jeff have distilled nine excellent principles that you can ignore only at your peril. Read this book to accelerate your thinking and become part of the future instead of part of the past."—Reid Hoffman, cofounder, LinkedIn

"A vitally important book, one worth reading and then rereading. Joi and Jeff will open your eyes, inspire you, and help you teach the others. Every three pages you'll find another reason to reset what you thought you knew about the world. A must read."—Seth Godin, author of Survival Is Not Enough

"Readers interested in technology, science history, futurism, innovation, and entrepreneurship will find this book to be very fascinating, thought provoking, and focused."—Booklist

"This provocative gem is a must-read for anyone interested in the cutting-edge research and exploration happening at MIT's Media Lab, innovation at countless universities and companies worldwide, or futuristic thinking in general."—Publisher's Weekly

"This exhilarating and authoritative book actually makes sense of our incredibly fast-paced, high-tech society. A standout among titles on technology and innovation, it will repay reading--and rereading--by leaders in all fields."—Kirkus (starred review)