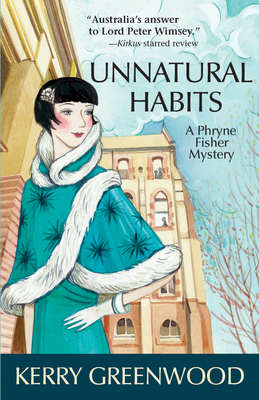 This is book number 19 in the Phryne Fisher Mysteries series.

"Among Phryne's pleasantly dashing adventures, this one stands out for its emphasis on sexual orientation and institutional coverups." —Kirkus Reviews STARRED review

The decidedly raven-haired Miss Phryne Fisher returns to delve deep into the dark side of Melbourne, Australia.

It's 1929, and girls are going missing. Little, pretty golden-haired girls. And they're not just pretty. Three of them are pregnant, poor girls from the harsh confines of the Magdalene Laundry. People are getting nervous.

Polly Kettle, a pushy, self-important girl reporter with ambition and no sense of self preservation, decides to investigate and promptly goes missing herself.

It's time for Phryne and Dot to put a stop to this and find Polly Kettle before something quite irreparable happens to all of the missing girls. It's all piracy and dark cellars, convents and plots, murder and mystery...and Phryne finally finds out if it's true that blondes have more fun.