The Talmud Unmasked: The Secret Rabbinical Teachings Regarding Christians (Paperback) 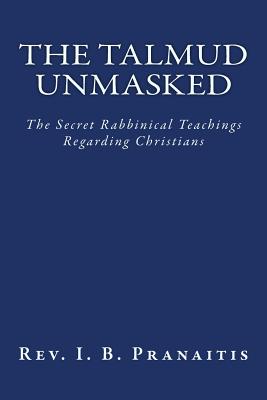 The Talmud Unmasked is a book written in 1892 by I. B. Pranaitis (1861-1917). The book, generally regarded as antisemitic, is a collection of quotes from the Talmud and Zohar which purports to demonstrate that Judaism despises non-Jews and promotes the murder of non-Jews. While most of the quotes are accurate, some are fabricated, and others are taken out of context. Pranaitis could not read Aramaic or Hebrew (the languages of the Talmud), and probably used works by August Rohling and others as his sources. Various elements tend to prove that the author, whose incompetence was established unambiguously at the time of the Beilis trial, ignores the rabbinical literature which he intends to describe, unlike other Christian polemists from which he largely borrows. Pranaitis was not able to read Aramaic, the primary language of the Talmud, and so he relied primarily on the works of Jakob Ecker and August Rohling.

The Reverend I. B. Pranaitis (1861-1917) was a Lithuanian Catholic priest, Russian Master of Theology and Professor of the Hebrew Language at the Imperial Ecclesiastical Academy of the Roman Catholic Church in Saint Petersburg, Russia. In 1894 there were legal proceedings against him on a charge of blackmail (for demanding 1000 roubles from a framing workshop in indemnification for a spoilt cheap picture which he claimed to be a picture by Murillo). For some time he was banished to Tver. [3]Since 1902, he was a priest in Tashkent. He published an anti-Semitic tract called Christianus in Talmude Iudaeorum in Latin in 1892 under the imprimatur of the Archbishop Metropolitan of Mogilev, which was subsequently translated into Polish, French, German, Russian, Lithuanian, Italian, English and Spanish. The English translation of the book is titled The Talmud Unmasked: The Secret Rabbinical Teachings concerning Christians.