Us Versus Them, Second Edition: The United States, Radical Islam, and the Rise of the Green Threat (Paperback) 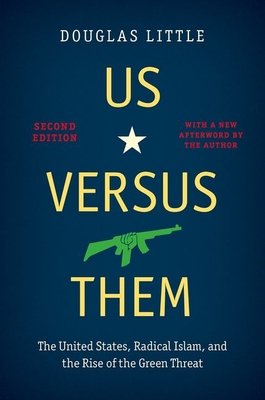 Acclaimed historian of U.S.-Middle East foreign relations Douglas Little examines&8239;how American presidents, policy makers, and diplomats dealt with the rise of Islamic extremism in the modern era. Focusing on White House decision-making from George H. W. Bush to Barack Obama, Little traces the transformation of the Cold War-era Red Threat into the Green Threat of radical Islam. Analyzing key episodes from the 1991 Persian Gulf War and Bill Clinton's mishandling of the Oslo peace process through the 9/11 attacks, George W. Bush's decision to invade Iraq, and the showdown with ISIS, Little shows how the threat posed by Islamic others shaped the Middle Eastern policies of both Democratic and Republican presidents. This second edition includes a new afterword that carries the story through the Trump administration and into the Biden presidency, focusing particularly on Afghanistan, a major trouble spot in the Muslim world that will command global attention for many years to come.