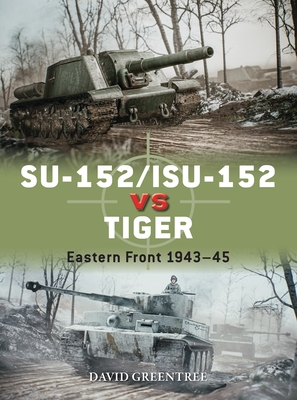 This fully illustrated volume compares two of the most iconic AFV's: the SU-152/ISU-152 and the Tiger, used on the Eastern Front during World War II.

On the Eastern Front in 1943, the Tiger-equipped heavy Panzer battalions gave German armored divisions an unmatched capability that cost the Red Army dearly. The Tiger's 88mm gun carved through Soviet defenses in the attack, and caused havoc amongst advancing Soviet armored formations when used in defense. Neither of the Red Army's heavy tanks (the KV-1 and KV-2) could match the Tiger's gun, and, more importantly, penetrate its armor at anything approaching standard combat range. The Soviet response was a stopgap vehicle that mounted a 152mm artillery piece onto the KV tank's chassis: the SU-152. This fascinating volume describes how the SU-152 was first deployed at Kursk in 1943, where its shell proved capable of killing Tigers, and documents its evolution into the ISU-152 in late 1943 (the latter carried the same gun on an IS chassis, and featured increased frontal armor). Packed with superb illustrations, it also explores the widely differing tactical employment of these two iconic AFVs, unit organization, equipment and weaponry, and crew roles.

David Greentree graduated from the University of York with a BA in History before completing an MA in War Studies at King's College London and qualifying as a lecturer in Further Education. In 1995 he accepted a commission in the Royal Air Force and has served in a variety of locations, including Afghanistan and Oman. He has written several books for Osprey, focusing on British military history and World War II. David is based in the UK.

"Number 120 in the Osprey Duel series, an 80-page soft-cover book in the usual style for this series with plenty of archive images, maps and colour artwork.
An opening Introduction sets the scene, along with a Chronology of key events. Then come the Design & Development story for both the German & the Soviet machines. The SU 152 was built on the KV chassis, while the ISU 152 was built on the IS tank chassis. The SU/ISU 152 was not built with the idea of a Tiger destroyer, more as an infantry support weapon capable of tackling fortifications. This is followed by an examination of the Technical Specifications, including the details of the guns, sights, ammunition, armour protection etc. There are some nice colour illustrations of the different ammunition rounds used by the German and Soviet vehicles, helpful detail for modellers. Combatants is the next section, looking at the units and organisation used by each side, before tackling several examples of Combat clashes which are described, such as the Belgorod-Kharkov Offensive in August 1943, Cherkassy in January-February 1944, Pleskau in April 1944 and Memel in October 1944, among others. That leaves just enough room for a closing Analysis.
The two vehicles being considered are different in many ways, a turreted tank against a turretless SPG, albeit with a large calibre weapon. Interesting text throughout and some useful archive images to support the narrative, along with the good quality artwork by Ian Palmer.
Thanks to Osprey for our review copy." - Robin Buckland, Military Model Scene