A Star Trek: The Next Generation: Time #8: A Time to Heal (Paperback) 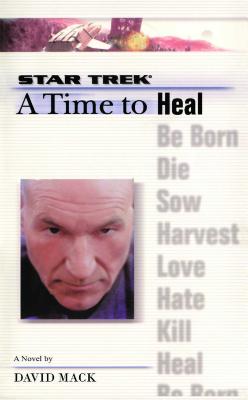 On the cusp of their epic battle with Shinzon, many of Captain Jean-Luc Picard's long-time crew were heading for new assignments and new challenges. Among the changes were William Riker's promotion to captain and his new command, Riker's marriage to Counselor Deanna Troi, and Dr. Beverly Crusher's new career at Starfleet Medical. But the story of what set them on a path away from the Starship Enterprise™ has never been told.
UNTIL NOW.
A cataclysmic war between the Federation and the Klingon Empire has been miraculously averted, and a new government is finally in place on the planet Tezwa. But deadly secrets still threaten the fragile peace accord.
Rebels still loyal to the old Tezwa regime have captured Commander Riker and are willing to kill to achieve their goals...the Orion Syndicate is interfering in the rebuilding -- and may also be involved in much more than that. But the most devastating revelation of all threatens the very foundations of the Federation itself -- leaving Captain Picard to possibly face the very conflict that he labored so hard to prevent....