Irena's Children: The Extraordinary Story of the Woman Who Saved 2,500 Children from the Warsaw Ghetto (Hardcover) 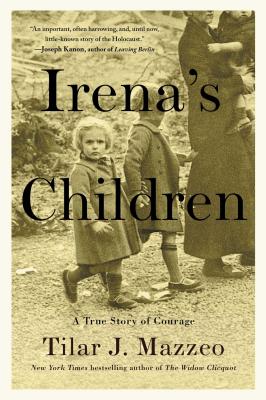 From the New York Times bestselling author of The Widow Clicquot comes an extraordinary and gripping account of Irena Sendler—the “female Oskar Schindler”—who took staggering risks to save 2,500 children from death and deportation in Nazi-occupied Poland during World War II.

In 1942, one young social worker, Irena Sendler, was granted access to the Warsaw ghetto as a public health specialist. While there, she reached out to the trapped Jewish families, going from door to door and asking the parents to trust her with their young children. She started smuggling them out of the walled district, convincing her friends and neighbors to hide them. Driven to extreme measures and with the help of a network of local tradesmen, ghetto residents, and her star-crossed lover in the Jewish resistance, Irena ultimately smuggled thousands of children past the Nazis. She made dangerous trips through the city’s sewers, hid children in coffins, snuck them under overcoats at checkpoints, and slipped them through secret passages in abandoned buildings.

But Irena did something even more astonishing at immense personal risk: she kept secret lists buried in bottles under an old apple tree in a friend’s back garden. On them were the names and true identities of those Jewish children, recorded with the hope that their relatives could find them after the war. She could not have known that more than ninety percent of their families would perish.

In Irena’s Children, Tilar Mazzeo tells the incredible story of this courageous and brave woman who risked her life to save innocent children from the Holocaust—a truly heroic tale of survival, resilience, and redemption.

Tilar J. Mazzeo is the New York Times and San Francisco Chronicle bestselling author of books that include The Widow Clicquot, The Secret of Chanel No. 5, and Hotel on the Place Vendôme. She also writes on food and wine for the mainstream press, and her work has appeared in venues such as Food & Wine and in her Back-Lane Wineries guidebook series (Ten Speed Press). Her course on creative nonfiction (Great Courses), featured as in-flight viewing content on Virgin America airlines, is widely distributed and has made her a nationally prominent teacher of writing in nonfiction genres. The Clara C. Piper Associate Professor of English at Colby College, she divides her time among coastal Maine, New York City, and Saanichton, British Columbia, where she lives with her husband and stepchildren.

“Irena Sendler’s rescue of thousands of Jewish children from murderous German hands is one of the most remarkable tales of righteous courage, resourcefulness, and wile to come out of the Holocaust, and Tilar Mazzeo’s eloquent telling of that story is remarkable as well. By plumbing Sendler’s memoirs and testimonies and interviewing the now-elderly children she saved, Mazzeo has put together an almost granular record of the cruel madness of the Warsaw Ghetto and the astonishing feats of deception it took to help a small portion of its doomed residents survive.  Even if you have read volumes on the Holocaust, you will find this book harrowing, surprising, and riveting.”
— Joseph Berger, longtime reporter for The New York Times and author of Displaced Persons: Growing Up American After the Holocaust

"An important, often harrowing, and until now little known story of the Holocaust: how thousands of children were rescued from the Warsaw ghetto by a Polish woman of extraordinary daring and moral courage."
— Joseph Kanon, author of Leaving Berlin

“Mazzeo chronicles a ray of hope in desperate times in this compelling biography of a brave woman who refused to give up.”
— Kirkus Reviews

"Irena’s Children weaves a fascinating narrative of a devastated city, Nazi depravity, and the extraordinary moral and physical courage of those who chose to fight inhumanity with compassion. This is a book that stays with you long after you've turned the last page.”
— Chaya Deitsch, author of Here and There: Leaving Hasidism, Keeping My Family

“This account of tremendous bravery is recommended for teens and adults who are drawn to inspirational stories.”
— Library Journal, starred review

"While this is not the first biography of Sendler, its succinctness and overall readability will introduce many readers to a truly brave and otherwise remarkable woman who initiated and spearheaded 'a vast collective effort of decency.”
— Publishers Weekly

"Mazzeo's portrait of Sendler... is harrowing; some passages are admittedly difficult to get through, but it feels so important that we do."
— Goop

“Ms. Mazzeo, author of the bestselling The Widow Clicquot, draws from interviews with Sendler’s daughter and children she saved to offer new details on Sendler’s early life and her remarkable undertaking during World War II.”
— The Wall Street Journal