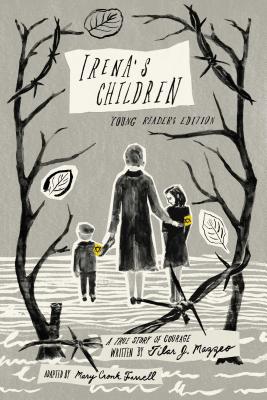 Irena Sendler was a young Polish woman living in Warsaw during World War II with an incredible story of survival and selflessness. And she’s been long forgotten by history.

This young readers edition of Irena’s Children tells Irena’s unbelievable story set during one of the worst times in modern history. With guts of steel and unfaltering bravery, Irena smuggled thousands of children out of the walled Jewish ghetto in toolboxes and coffins, snuck them under overcoats at checkpoints, and slipped them through the dank sewers and into secret passages that led to abandoned buildings, where she convinced her friends and underground resistance network to hide them.

In this heroic tale of survival and resilience in the face of impossible odds, Tilar Mazzeo and adapter Mary Cronk Farrell share the true story of this bold and brave woman, overlooked by history, who risked her life to save innocent children from the horrors of the Holocaust.

Tilar J. Mazzeo is the New York Times and San Francisco Chronicle bestselling author of books that include The Widow Clicquot, The Secret of Chanel No. 5, and Hotel on the Place Vendôme. The Clara C. Piper Associate Professor of English at Colby College, she divides her time among coastal Maine, New York City, and Saanichton, British Columbia, where she lives with her husband and stepchildren.

Mary Cronk Farrell is a former award-winning journalist and author of fiction and nonfiction books for children. She writes with passion about little-known people of history who face great adversity with courage. Her book Pure Grit: How American World War II Nurses Survived Battle and Prison Camp in the Pacific has been named a Notable Social Studies Trade Book for Young People, Jefferson Cup Honor Book, Washington State Book Award Finalist, Booklist Editor’s Choice, to the Amelia Bloomer Project List and awarded a EUREKA! Children’s Book Award for Excellence in Nonfiction. She lives in Washington State.

“Farrell’s adaptation of Mazzeo’s adult title (2016) clearly presents [Irena Sendler’s] life and the ever present reality of death in a sobering, heartbreaking narrative. Readers will understand how Sendler came to be honored by Israel’s Yad Vashem Holocaust memorial as one of the Righteous Among the Nations.”
— Kirkus Reviews