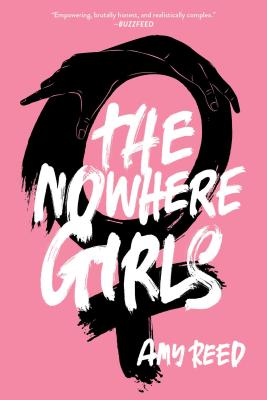 “A call-to-action to everyone out there who wants to fight back.” —Bustle
“Scandal, justice, romance, sex positivity, subversive anti-sexism—just try to put it down.” —Kirkus Reviews (starred review)
“Cuts straight to the core of rape culture—masterfully fierce, stirring, and deeply empowering.” —Amber Smith, New York Times bestselling author of The Way I Used to Be

Three misfits come together to avenge the rape of a fellow classmate and trigger a change in the misogynist culture at their high school transforming the lives of everyone around them in this searing and timely story.

Who are the Nowhere Girls?

They’re everygirl. But they start with just three:

Grace Salter is the new girl in town, whose family was run out of their former community after her southern Baptist preacher mom turned into a radical liberal after falling off a horse and bumping her head.

Rosina Suarez is the queer punk girl in a conservative Mexican immigrant family, who dreams of a life playing music instead of babysitting her gaggle of cousins and waitressing at her uncle’s restaurant.

Erin Delillo is obsessed with two things: marine biology and Star Trek: The Next Generation, but they aren’t enough to distract her from her suspicion that she may in fact be an android.

When Grace learns that Lucy Moynihan, the former occupant of her new home, was run out of town for having accused the popular guys at school of gang rape, she’s incensed that Lucy never had justice. For their own personal reasons, Rosina and Erin feel equally deeply about Lucy’s tragedy, so they form an anonymous group of girls at Prescott High to resist the sexist culture at their school, which includes boycotting sex of any kind with the male students.

Told in alternating perspectives, this groundbreaking novel is an indictment of rape culture and explores with bold honesty the deepest questions about teen girls and sexuality.

Amy Reed is the author of the contemporary young adult novels Beautiful, Clean, Crazy, Over You, Damaged, Invincible, Unforgivable, The Nowhere Girls, and The Boy and Girl Who Broke the World. She is also the editor of Our Stories, Our Voices. She is a feminist, mother, and quadruple Virgo who enjoys running, making lists, and wandering around the mountains of western North Carolina where she lives. You can find her online at AmyReedFiction.com.

“A call-to-action to everyone out there who wants to fight back.” –Bustle

“Cuts straight to the core of rape culture—masterfully fierce, stirring, and deeply empowering.” –Amber Smith, New York Times bestselling author of The Way I Used to Be

“A thoughtful, literary portrayal of female sexuality in a culture that often rejects it.” –Booklist, starred review