The Lost Book of the White (The Eldest Curses #2) (Paperback) 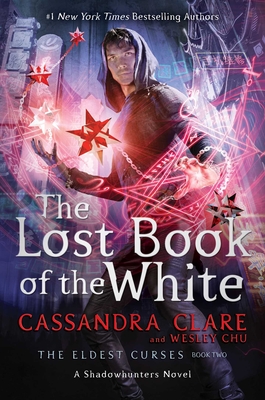 This is book number 2 in the The Eldest Curses series.

From #1 New York Times bestselling authors Cassandra Clare and Wesley Chu comes the second book in the Eldest Curses series and a thrilling adventure for High Warlock Magnus Bane and Alec Lightwood, for whom a death-defying mission into the heart of evil is not just a job, it’s also a romantic getaway. The Lost Book of the White is a Shadowhunters novel.

Life is good for Magnus Bane and Alec Lightwood. They’re living together in a fabulous loft, their warlock son, Max, has started learning to walk, and the streets of New York are peaceful and quiet—as peaceful and quiet as they ever are, anyway.

Until the night that two old acquaintances break into Magnus’s apartment and steal the powerful Book of the White. Now Magnus and Alec will have to drop everything to get it back. They need to follow the thieves to Shanghai, they need to call some backup to accompany them, and they need a babysitter. Also, someone has stabbed Magnus with a strange magical weapon that is changing the very nature of his powers.

Fortunately, their backup consists of Clary, Jace, Isabelle, and newly minted Shadowhunter Simon. In Shanghai, they learn that a much darker threat awaits them. Magnus’s magic is growing unstable, and if they can’t stop the demons flooding into the city, they might have to follow them all the way back to the source—to the very realm of the dead.

Wesley Chu won the John W. Campbell Award for Best New Writer. His debut novel, The Lives of Tao, earned him a Young Adult Library Services Association Alex Award and a Science Fiction Goodreads Choice Award Top 10 slot. He is also the coauthor of the Eldest Curses series with Cassandra Clare, the first book of which debuted at #1 on the New York Times bestseller list.

"Despite high stakes, heroes and villains alike adopt a witty, almost jovial disposition that makes the plot read like a romantic, but dangerous, vacation. The incorporation of Chinese Shadowhunters, gods, demons, and realms deepens the series’ mythology...Plenty of fan service within a rich setting."
— Kirkus Reviews