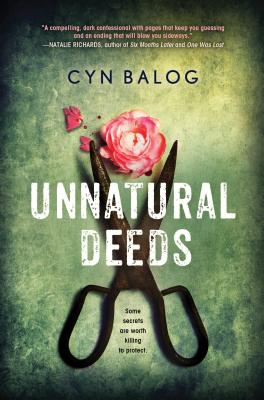 Secrets. Obsession. Murder. Victoria is about to discover just how dangerous it can be to lose yourself.

Victoria Zell doesn't fit in, not that she cares what anyone thinks. She and her homeschooled boyfriend, Andrew, are inseparable. All they need is each other. That is, until Zachary Zimmerman joins her homeroom. Within an hour of meeting, he convinces good-girl Vic to cut class. And she can't get enough of that rush.

Despite Vic's loyalty to Andrew, she finds her life slowly entwining with Z's. Soon she's lying to everyone she knows in an effort to unravel Z's secrets. Except Z's not the only one with a past. Victoria's hiding her own secrets, secrets that will come back to haunt her…and destroy everything in her path.

CYN BALOG is is the author of many young adult novels, including Alone, which received a starred review from VOYA Magazine. She lives outside Allentown, Pennsylvania with her husband and daughters. Visit her online at www.cynbalog.com.

"Like a PG-13 version of Gone Girl (2012), Balog's (Dead River, 2013, etc.) latest tells the tense and tragic story of three teens mixed up in a world of murder, obsession, and mental illness… A page-turner that will keep readers riveted, this is a treat for mystery fans and will keep readers guessing right up until the end."" — Kirkus Reviews

"Vic’s psychological struggle culminates in an unpredictable, shocking ending that most readers will not see coming. This thriller will stay with readers long after the last page." — School Library Journal

"The compelling story takes hold, leaving readers guessing until the end. The understated dread builds to a tense
and tragic climax." — Booklist

"Unnatural Deeds is a compelling, dark confessional with pages that keep you guessing and an ending that will blow you sideways." — Natalie D. Richards, author of Six Months Later and One Was Lost

"Readers who enjoyed Need by Joelle Charbonneau or The Killer in Me by Margot Harrison will find this horrific mystery perfectly explosive–this one will require a late night." — Manhattan Book Review