Under This Roof: The White House and the Presidency--21 Presidents, 21 Rooms, 21 Inside Stories (Paperback) 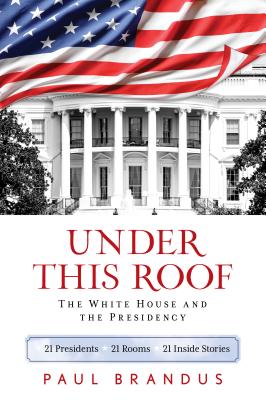 "Like taking a tour of the White House with a gifted storyteller at your side " 1.Why, in the minutes before John F. Kennedy was murdered, was a blood-red carpet installed in the Oval Office? 2.If Abraham Lincoln never slept in the Lincoln Bedroom, where did he sleep? 3.Why was one president nearly killed in the White House on inauguration day-and another secretly sworn in? 4.What really happened in the Situation Room on September 11, 2001? History leaps off the page in this "riveting," "fast-moving" and "highly entertaining" book on the presidency and White House in Under This Roof, from award-winning White House-based journalist Paul Brandus. Reporting from the West Wing briefing room since 2008, Brandus-the most followed White House journalist on Twitter (@WestWingReport)-weaves together stories of the presidents, their families, the events of their time-and an oft-ignored major character, the White House itself. From George Washington to Barack Obama-the story of the White House is the story of America itself, Brandus writes. You'll: 1.Walk with John Adams through the still-unfinished mansion, and watch Thomas Jefferson plot to buy the Louisiana Territory 2.Feel the fear and panic as British invaders approach the mansion in 1814-and Dolley Madison frantically saves a painting of Washington 3.Gaze out the window with Abraham Lincoln as Confederate flags flutter in the breeze on the other side of the Potomac 4.Be in the room as one president is secretly sworn in, and another gambles away the White House china in a card game 5.Stand by the presidential bed as one First Lady-covering up her husband's illness from the nation-secretly makes decisions on his behalf 6.Learn how telephones, movies, radio, TV changed the presidency-and the nation itself Through triumph and tragedy, boom and bust, secrets and scandals, Brandus takes you to the presidential bedroom, movie theater, Situation Room, Oval Office and more. Under This Roof is a "sensuous account of the history of both the home of the President, and the men and women who designed, inhabited, and decorated it. Paul Brandus captivates with surprising, gloriously raw observations.

An award-winning, independent member of the White House press corps, Paul Brandus founded West Wing Reports (R) in 2009 (Twitter: @WestWingReport) and provides reports for television and radio outlets around the United States and overseas. He is also a Washington columnist for The Week and moderates panels for the magazine in Washington and around the U.S. on topics like cybersecurity, energy and infrastructure. He has lectured at the Columbia University Graduate School of Journalism. An innovator in social media, Brandus's Twitter account @WestWingReport is the second biggest among all accredited members of the White House press corps. In 2011, he won the Shorty Award for Best Journalist on Twitter, sponsored by the Knight Foundation. The Atlantic calls Brandus One of the top Washington Insiders You Should Follow on Twitter. His career spans network television, Wall Street and several years as a foreign correspondent based in Moscow, where he covered the collapse of the Soviet Union for NBC Radio and Public Radio International's award-winning business and economics program "Marketplace." He has traveled to 53 countries on five continents and has reported from, among other places Iraq, Chechnya, China and Guantanamo Bay, Cuba. He began his career as a desk assistant at NBC News Washington and as a U.S. Senate staffer. Brandus sits on the Board of Governors of the Overseas Press Club of America and serves as its Washington, D.C. representative. He lives in Reston, Virginia.