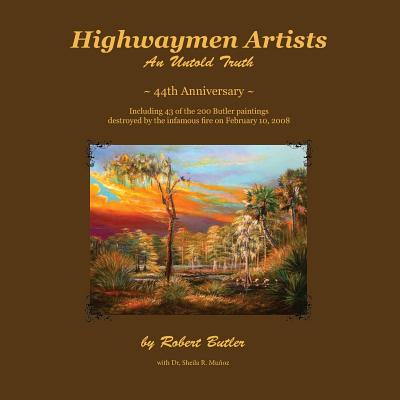 Highwaymen Artists: An Untold Truth is the story of the Florida Highwaymen artists from the perspective of Robert Butler. This book focuses only on Robert Butler's Highwaymen years. Find his complete autobiography in Timeless Echoes: The Life and Art of Robert Butler. Highwaymen Artists is very unique in that it includes 43 of the approximately 200 Robert Butler paintings that were lost in a horrific fire in Lakeland, Florida, February 10, 2008. Regarding this book, Robert said, "The late 1960s should have been the worst time in United States history for African Americans to be peddling primitive art on the streets of Florida But looking back at the collectors of my paintings offers me the picture of an alternate subliminal reality, a place of heart wherein the love of art transcended the moment. "I am now enlightened, believing that true artists are defined neither by ethnicity nor nationality, but by their ability to articulate a meaningful perception of life. Perhaps that is why my art is conspicuously absent of any narrative of the human drama that characterized life during its creation. "Tested amid that great caldron of American history, the Highwaymen's passionate pursuit of the American dream reflects only the best of what we are. That is what made painting the world of my beloved Florida so special. "If it is true that each person's work is a self portrait, the sketch of life that I have devoted to the fabric of American culture is my picture painted in the hues of passion for the place I love. To that end my story seeks to convey not only my unique perspective on American life as an artist, but also to articulate what it was like to experience a sensory world where every valid equation of sight, sound, and color heightened every nuance of an historical moment. "The story of my Highwaymen years is not only an historical calendar of the events, people, and places that shaped the artist I became, it also parallels the quickening of America's pulse at the epicenter of an historical time, the Civil Rights Era. For all Americans it was a time to question the spiritual narrative of our dreams anew and to discover the color of our passion amid the changing order of American life. For me, it all unfolded along the highways of Florida beginning in 1968. "The thoughts, facts, and reflections found in this book developed during the years herein characterized as my Highwaymen years. Many are my personal eye witness account of events. Other sources include historical research of American art prior to the Civil War and discussions with fellow Highwaymen artists and Highwaymen art collectors. James Fitch (author who coined the name), Geoff Cook (major collector of Highwaymen art), and many other personal owners of our art have also contributed.

Through talent, a fierce work ethic, and a winning personality, Robert Butler moved from a turpentine still in Baxley, Georgia, to international fame as an artist. One of the original 26 Florida Highwaymen artists, Robert Butler became best known for his natural landscape and wildlife paintings of wild Florida. The one thing that rang clear throughout the life of Robert Butler was that the hand of destiny was upon him from very early childhood. As an African American artist struggling to survive midst the Civil Rights era of our country and facing myriads of conflicts, and even though Robert attempted to escape those conflicts, it was those very conflicts which served him well by honing his natural ability to paint and outfitting him with an eye to see the rapidly diminishing landscapes of wild Florida. It pushed him to put those landscapes to canvas before they completely disappeared. This artist would be the only artist attributed to having painted every ecosystem in wild Florida, something which will never be repeated in history, as many no longer exist, having succumbed to "progress." Butler paintings are distinctive in their dramatically lit, romanticized portrayals of his beloved wild Florida. His paintings are known to be finely detailed, while exuding an ethereal light in them, giving them an almost sacred quality, the music of his heart. He has managed in his paintings to strike a balance in celebrating wild Florida, while at the same time grieving at her passing. Robert's journey led him around the world and into the Florida Artists Hall of Fame in 2004. His paintings grace thousands of homes and businesses, galleries, museums, and government buildings throughout the United States and in many other countries. He was sought out by conservationists and environmentalists alike to assist them in advancing their causes. Robert Butler and his wife of more than 50 years, Dorothy, together parented nine children, each of whom became an artist in his own right. Just as he realized his dream of seeing his life story in print, Robert Butler laid down his paintbrush for the last time and departed this life on March 19, 2014. Through his story, Florida, as well as the whole world, will know that "the Butler was here." Books by Robert Butler: Timeless Echoes: The Life and Art of Robert Butler Highwaymen Artists: An Untold Truth The Cracker Cowman: The Heritage of Florida Ranches as Depicted by Artist Robert Butler