The Secrets We Share: A Gripping Novel of Suspense (Hardcover) 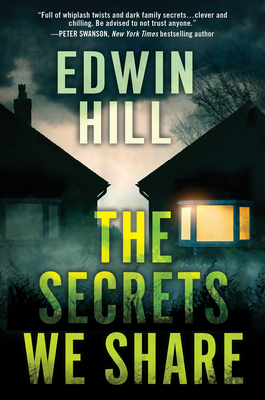 At first glance, Natalie Cavanaugh and Glenn Abbott hardly look like sisters. Even off-duty, Natalie dresses like a Boston cop, preferring practical clothes and unfussy, pinned-up hair. Her younger sister, Glenn, seems tailor-made for the spotlight, from her signature red mane to her camera-ready smile. Glenn has spent years cultivating her brand through her baking blog, and with the publication of her new book, that hard work seems about to pay off. But her fans have no idea about the nightmare in Glenn and Natalie’s past.

Twenty years ago, their father’s body was discovered in the woods behind their house. A trauma like that doesn’t fit with Glenn’s public image. Yet, maybe someone reading her blog does know something. There have been anonymous online messages, vague yet ominous, hinting that she’s being watched. And with unsettling coincidences hitting ever closer to home, both Glenn and Natalie soon have more pressing matters to worry about, especially when a dead body is found in an abandoned building . . .

Natalie is starting to wonder how much Glenn really knows about the people closest to her. But are there also secrets Natalie has yet to uncover about those she herself trusts? For two decades, she’s believed their father was murdered by their neighbor, with whom he was having an affair. But if those events are connected to what’s happening now, maybe there’s much more that Natalie doesn’t know. About their father. About their neighbors. About her friends. Maybe even about herself.

But there are no secrets between sisters . . . are there?

“This suspenseful story will have readers careening from one erroneous conclusion to the next.” —Library Journal STARRED REVIEW

“Hill keeps the clock ticking and the twists coming right up to the shocking conclusion.” –Publishers Weekly

"Full of whiplash twists and dark family secrets, Edwin Hill's new standalone is clever and chilling. Be advised to not trust anyone." —PETER SWANSON, best-selling author of Every Vow You Break and The Kind Worth Killing

Edwin Hill is a suspense writer and author of the critically-acclaimed Hester Thursby mystery series, the first of which, Little Comfort, was an Agatha Award-finalist, a selection of the Mysterious Press First Mystery Club and a Publishers Marketplace Buzz Books selection. The second installment, The Missing Ones, was also an Agatha Award-finalist and a Sue Grafton Memorial Award nominee. Formerly the vice president and editorial director for Bedford/St. Martin's (Macmillan), he now teaches at Emerson College and has written for the LA Review of Books, The Life Sentence, Publishers Weekly, and Ellery Queen Mystery Magazine. He lives in Roslindale, Massachusetts with his partner Michael and their Labrador, Edith Ann. Visit him online at Edwin-Hill.com.

“This suspenseful story will have readers careening from one erroneous conclusion to the next.”
—Library Journal STARRED REVIEW

"Full of whiplash twists and dark family secrets, Edwin Hill's new standalone is clever and chilling. Be advised to not trust anyone."
—PETER SWANSON, best-selling author of Every Vow You Break and The Kind Worth Killing

"A superbly crafted thriller that delivers on every level. Hill is a master storyteller that leads the reader through a maze, expertly unveiling one twist after another.”
—FEMI KAYODE, author of Lightseekers

“A bold, ambitious novel with a big, multigenerational story line, and a smart balance between mystery and suspense… For fans of Robert Bryndza and Karin Slaughter.”
—First Clue STARRED REVIEW

“In Edwin Hill’s novel The Secrets We Share, love and deception intertwine through murders connected to one family…The book’s action and revelations are thrilling.”
—Foreword Reviews