The Rape of Lucrece (Paperback) 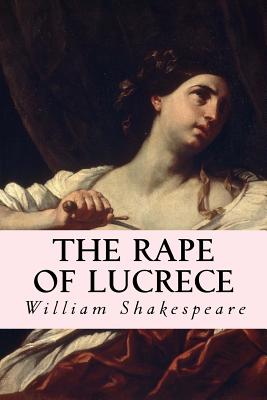 The Rape of Lucrece (1594) is a narrative poem by William Shakespeare about the legendary Lucretia. In his previous narrative poem, Venus and Adonis (1593), Shakespeare had included a dedicatory letter to his patron, the Earl of Southampton, in which he promised to write a "graver work". Accordingly, The Rape of Lucrece has a serious tone throughout. The poem begins with a prose dedication addressed directly to the Earl of Southampton, which begins, "The love I dedicate to your Lordship is without end." It refers to the poem as a pamphlet, which describes the form of its original publication of 1594. The dedication is followed by "The Argument", a prose paragraph that summarizes the events preceding the start of the poem, which begins in media res. The poem contains 1,855 lines, divided into 265 stanzas of seven lines each. The rhythm of each line is iambic pentameter. The rhyme scheme for each stanza is ABABBCC, a format known as "rhyme royal", which has been used by Geoffrey Chaucer, John Milton and John Masefield. One evening, at the town of Ardea, where a battle is being fought, two leading Roman soldiers, Tarquin and Collatine, are talking. Collatine describes his wife, Lucrece, in glowing terms - she is beautiful and chaste. The following morning, Tarquin travels to Collatine's home. Lucrece welcomes him. Tarquin entertains her with stories of her husband's deeds on the battlefield. Tarquin spends the night, and is torn by his desire for Lucrece. His desire overcomes him, and he goes to Lucrece's chamber, where she is asleep. He reaches out and touches her breast, which wakes her up. She is afraid. He tells her that she must give in to him, or else he will kill her. He also threatens to cause her dishonor by murdering a slave and placing the two bodies in each other's arms, and then he would claim that he killed her because he discovered them in this embrace. If she would give in to him, Tarquin promises to keep it all secret. Lucrece pleads with him to no avail. He rapes her. Full of shame and guilt, Tarquin sneaks away. Lucrece is devastated, furious and suicidal. She writes a letter to her husband, asking him to come home. When Collatine gets home, Lucrece tells him the whole story, but doesn't say who did it. Collatine demands to know. Before she tells him, Lucrece gets the soldiers, who are also there, to promise to avenge this crime. She then tells her husband who did it, and she immediately pulls out a knife, stabs herself and dies. Collatine's grief is great - he wants to kill himself, as well. His friend, Brutus, suggests that revenge is a better choice. The soldiers carry Lucrece's body through the streets of Rome. The citizens, angered, banish Tarquin and his family. The Rape of Lucrece draws on the story described in both Ovid's Fasti and Livy's history of Rome. Both authors were writing a few centuries after the events occurred, and their histories are not accepted as strictly accurate, partly because Roman records were destroyed by the Gauls in 390 B.C., and the histories prior to that have been mixed with legends. Also the story of the poem has much in common with romantic fictions. The Roman king was Lucius Tarquinus, or Tarquin. Because of his arrogance and his tyranny, he is also known as Tarquinius Superbus (Tarquin the Proud). His son, Sextus Tarquinius, heir to the throne, is the rapist of the story. At the beginning of the poem the Roman army is waging war on a tribe known as the Volscians, who had claimed territory south of Rome. The Romans are laying siege to Ardea, a Volscian city 20 miles south of Rome. In 509 BC, Sextus Tarquinius, son of the king of Rome, raped Lucretia (Lucrece), wife of Collatinus, one of the king's aristocratic retainers. As a result, Lucrece committed suicide.