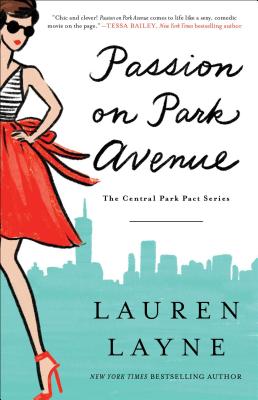 This is book number 1 in the The Central Park Pact series.

An Oprah.com Best Romance Novel of 2019!

“Perfect for readers who love the dishy women's fiction of Candace Bushnell.” —Booklist

From the author of the New York Times bestselling Stiletto and Oxford series, the first in a sizzling new series following the unlikely friendship of three Upper East Side women as they struggle to achieve their dreams and find true love and happiness in the city that never sleeps.

For as long as she can remember, Bronx-born Naomi Powell has had one goal: to prove her worth among the Upper East Side elite—the same people for which her mom worked as a housekeeper. Now, as the strongminded, sassy CEO of one of the biggest jewelry empires in the country, Naomi finally has exactly what she wants—but it’s going to take more than just the right address to make Manhattan’s upper class stop treating her like an outsider.

The worst offender is her new neighbor, Oliver Cunningham—the grown son of the very family Naomi’s mother used to work for. Oliver used to torment Naomi when they were children, and as a ridiculously attractive adult, he’s tormenting her in entirely different ways. Now they find themselves engaged in a battle-of-wills that will either consume or destroy them.

Lauren Layne is the New York Times and USA TODAY bestselling author of more than three dozen romantic comedies. Her books have sold over a million copies worldwide. Lauren’s work has been featured in Publishers Weekly, Glamour, The Wall Street Journal, and Inside Edition. She is based in New York City.

“Upbeat, empowering, and will give you a Sex and the City vibe from page one.”
— Popsugar

“The word charm is pretty much synonymous with Lauren Layne . . . a work of genius.”
— Hypable

"I couldn't put it down! Not only is the friendship between Naomi, Claire and Audrey refreshing and inspirational, the chemistry between Naomi and Oliver is off the charts! I love a sassy heroine and a funny hero and Layne delivers both. Witty banter and an electric connection between Naomi and Oliver kept me turning the pages late into the night. Lauren Layne knocks this one right out of Park Avenue!"
— Samantha Young, New York Times bestselling author of Fight or Flight

"Featuring wine in coffee mugs, dinner parties with ulterior motives, and Naomi and Oliver being (almost) caught with their pants down, this is perfect for readers who love the dishy women's fiction of Candace Bushnell."
— Booklist

"Ms. Layne is off to a great start for a new series of smart and fashionable women not looking for their HEAs that I can't wait to follow."
— Harlequin Junkie

“Saucy and fun, this series is off to a promising start.”
— BookTrib

"A cute and easy story perfect for summer reading, Passion on Park Avenue by Lauren Layne is a flirty fling of a novel."
— Fresh Fiction