The Ideological Scramble for Africa: How the Pursuit of Anticolonial Modernity Shaped a Postcolonial Order, 1945-1966 (Hardcover) 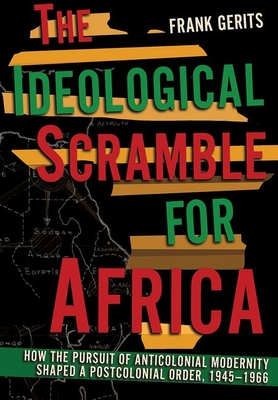 By Frank Gerits
This item is backordered and not currently available. Please contact us for an estimated availability date.

In The Ideological Scramble for Africa, Frank Gerits examines how African leaders in the 1950s and 1960s crafted an anticolonial modernization project. Rather than choose Cold War sides between East and West, anticolonial nationalists worked to reverse the psychological and cultural destruction of colonialism.

Kwame Nkrumah's African Union was envisioned as a federation of liberation to challenge the extant imperial forces: the US empire of liberty, the Soviet empire of equality, and the European empires of exploitation. In the 1950s, the goal of proving the potency of a pan-African ideology shaped the agenda of the Bandung Conference and Ghana's support for African liberation, while also determining what was at stake in the Congo crisis and in the fight against white minority rule in southern and eastern Africa. In the 1960s, the attempt to remake African psychology was abandoned, and socioeconomic development came into focus. Anticolonial nationalists did not simply resist or utilize imperial and Cold War pressures but drew strength from the example of the Haitian Revolution of 1791, in which Toussaint Louverture demanded the universal application of Europe's Enlightenment values. The liberationists of the postwar period wanted to redesign society in the image of the revolution that had created them.

The Ideological Scramble for Africa demonstrates that the Cold War struggle between capitalism and Communism was only one of two ideological struggles that picked up speed after 1945; the battle between liberation and imperialism proved to be more enduring.

Frank Gerits is Assistant Professor in the History of International Relations at Utrecht University in Utrecht, the Netherlands, and Research Fellow of the International Studies Group at the University of the Free State in Bloemfontein, South Africa. He is the coeditor of Visions of African Unity. Follow him on Twitter @FrankGerits.