Judgment and Mercy: The Turbulent Life and Times of the Judge Who Condemned the Rosenbergs (Hardcover) 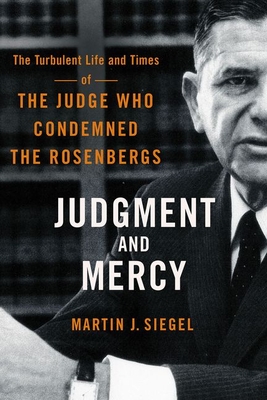 In Judgment and Mercy, Martin J. Siegel offers an insightful and compelling biography of Irving Robert Kaufman, the judge infamous for condemning Julius and Ethel Rosenberg to death for atomic espionage.

In 1951, world attention fixed on Kaufman's courtroom as its ambitious young occupant stridently blamed the Rosenbergs for the Korean War. To many, the harsh sentences and their preening author left an enduring stain on American justice. But then the judge from Cold War central casting became something unexpected: one of the most illustrious progressive jurists of his day.

Upending the simplistic portrait of Judge Kaufman as a McCarthyite villain, Siegel shows how his pathbreaking decisions desegregated a Northern school for the first time, liberalized the insanity defense, reformed Attica-era prisons, spared John Lennon from politically motivated deportation, expanded free speech, brought foreign torturers to justice, and more. Still, the Rosenberg controversy lingered. Decades later, changing times and revelations of judicial misconduct put Kaufman back under siege. Picketers dogged his footsteps as critics demanded impeachment. And tragedy stalked his family, attributed in part to the long ordeal. Instead of propelling him to the Supreme Court, as Kaufman once hoped, the case haunted him to the end.

Absorbingly told, Judgment and Mercy brings to life a complex man by turns tyrannical and warm, paranoid and altruistic, while revealing intramural Jewish battles over assimilation, class, and patriotism. Siegel, who served as Kaufman's last law clerk, traces the evolution of American law and politics in the twentieth century and shows how a judge unable to summon mercy for the Rosenbergs nonetheless helped expand freedom for all.

Martin J. Siegel practices and teaches law in Houston. After clerking for Judge Kaufman, he served as an Assistant US Attorney in Manhattan and on the staff of the US Senate Judiciary Committee. His writing has been published in the New York Times, the Los Angeles Times, the Houston Chronicle, and legal journals.