Doctor Star & The Kingdom of Lost Tomorrows: From the World of Black Hammer (Paperback) 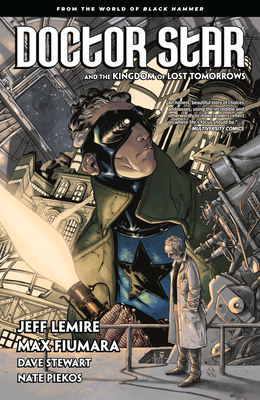 This dual-narrative story set in the world of the Eisner-award winning Black Hammer series chronicles the legacy of a Golden Age superhero. Collects the first four issues of Doctor Star from New York Times bestselling and Eisner-winning creator Jeff Lemire!

An aged crime fighter desperately wants to reconnect with his estranged son, who he hoped would one day take the mantle of Doctor Star. Over the course of the story we learn his World War II-era origin, how he got his powers, his exciting astral adventures, the formation of some of Black Hammer's greatest heroes, and more in this heartbreaking superhero tale about fathers and sons.

New York Times Bestselling author, Jeff Lemire, is the creator of the acclaimed graphic novels Sweet Tooth, Essex County, The Underwater Welder and Trillium. His upcoming projects include the original graphic novel Roughneck from Simon and Schuster, as well as the sci-fi series Descender for Image Comics (with Dustin Nguyen) and Black Hammer for Dark Horse Comics (with Dean Ormston). Jeff has also written Green Arrow, Justice League and Animal Man for DC Comics and Hawkeye for Marvel Comics. In 2008 and in 2013 Jeff won the Schuster Award for Best Canadian Cartoonist. He has also received The Doug Wright Award for Best Emerging Talent and the American Library Association's prestigious Alex Award, recognizing books for adults with specific teen appeal. He has also been nominated for 8 Eisner awards, 7 Harvey Awards and 8 Shuster Awards. In 2010 Essex County was named as one of the five Essential Canadian Novels of the Decade.