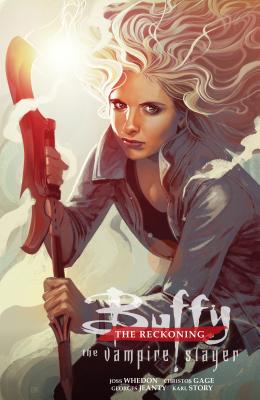 Joss Whedon's Buffy and crew are confronted by a future Big Bad who has travelled to the present, intent on stealing the power of the Slayers, becoming all-powerful, and destroying the world as we know it!

The lives of Buffy and the Scoobies haven't been too eventful for a while--at least as far as fighting demons and the forces of darkness are concerned. But that all changes when Angel brings news of an amassing a force that must be reckoned with: Wolfram & Hart, a legion of demons, and Harth, vampire from the future. Buffy knows Harth and his twin sister--the Slayer, Fray--from her meeting with them and Dark Willow in the future. But this army that has been gathered is more than she and her crew were expecting . . . Narrowly escaping an initial encounter, the gang travels to the future to recruit Fray and learn of their dismal fate should they fail to defeat this legion that has invaded the present. Harth is after the power of the Slayers, and being in possession of all their memories, he knows how to rewrite the outcome of this ultimate battle before it occurs. This is the reckoning . . . and it could be the end of Buffy, Fray, and all the Slayers, forever.