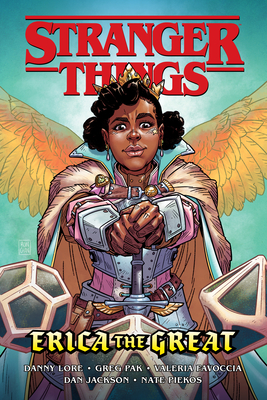 In this Middle Grade foray into the 80's-nostalgia hit series from Netflix, when Erica's frenemy loses track of her mother's prized Parakeet, the two will have to work together to return the bird safe and sound, or deal with the consequences. They learn that even the toughest and smartest people need a little help now and then.

Hawkins Indiana has been plagued by strange events for years now. With the Starcourt Mall's recent destruction, Erica has lost her favorite hangout spot and her "free Ice cream for life" deal at Scoops-Ahoy. To make matters worse, her brother is too busy for her and her mom won't let her play Dungeons and Dragons anymore. This is the story of an ambitious, bossy, brilliant ten-year-old dealing with boredom and the complexities of maintaining friendships through tough times.

Greg Pak is a comic book writer and filmmaker best known for Action Comics and Batman/Superman for DC Comics, Planet Hulk and Magneto Testament for Marvel Comics, and the Code Monkey Save World graphic novel and The Princess Who Saved Herself children's book, based on the songs of Jonathan Coulton. He directed the award-winning feature film Robot Stories and dozens of shorts, including Happy Fun Room. He was named one of 25 Filmmakers to Watch by Filmmaker Magazine, described as "a talent with a future" by the New York Times, and named Breakout Talent of the year by Wizard Magazine. Pak also co-wrote the fan favorite Incredible Hercules series with Fred Van Lente, with whom he also wrote the new how-to book, Make Comics Like the Pros. The author lives in New York, New York.