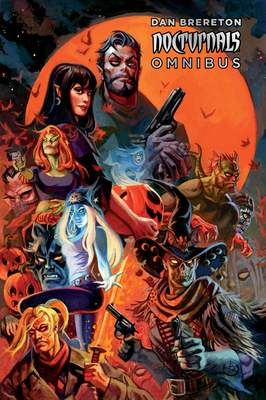 The Nocturnals revolves around the mysterious quest of underworld enforcer and occult figure, Doc Horror; his supernaturally-gifted daughter Evening (aka Halloween Girl) who carries a pumpkin full of haunted toys; the Gunwitch, a silent, two-gun revenant with an itch to kill monsters; the lissome wraith Polychrome, and a host of hard-boiled inhuman players battling hidden evils lurking on the outskirts of human knowledge.

Daniel Brereton is an American writer and illustrator who has produced notable work in the comic book field. He is known for his skills as a painter and his distinctive character designs. His first published work in the comics industry was the story "Lost Causes Chapter 1" in Merchants of Death #1 (July 1988) published by Eclipse Comics and he painted the Black Terror limited series in 1989–1990. Brereton gained further attention for his work on Batman: Thrillkiller, Superman and Batman: Legends of the World's Finest, and JLA: Seven Caskets, His most famous work is his own series "The Nocturnals." Image Comics published Dan Brereton: The Goddess & The Monster, a collection of his work, in August 2010. Brereton wrote and drew a Batman story for DC Comics' digital first anthology series Legends of the Dark Knight in December 2015.