The Red Scrolls of Magic (The Eldest Curses) (CD-Audio) 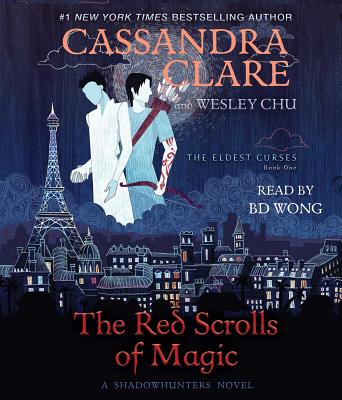 From #1 New York Times and USA TODAY bestseller Cassandra Clare and award-winner Wesley Chu comes the first book in a new series full of “swoon-worthy romance [and] abundant action” (Publishers Weekly). The Red Scrolls of Magic is a Shadowhunters novel.

All Magnus Bane wanted was a vacation—a lavish trip across Europe with Alec Lightwood, the Shadowhunter who against all odds is finally his boyfriend. But as soon as the pair settles in Paris, an old friend arrives with news about a demon-worshipping cult called the Crimson Hand that is bent on causing chaos around the world. A cult that was apparently founded by Magnus himself. Years ago. As a joke.

Wesley Chu won the John W. Campbell Award for Best New Writer. His debut novel, The Lives of Tao, earned him a Young Adult Library Services Association Alex Award and a Science Fiction Goodreads Choice Award Top 10 slot. He is also the coauthor of the Eldest Curses series with Cassandra Clare, the first book of which debuted at #1 on the New York Times bestseller list.

"In the first audiobook in The Eldest Curses trilogy (part of The Shadowhunter Chronicles), B.D. Wong, known for his work in Disney films, television, and theater, gives voice to warlock Magnus Bane and his boyfriend, Alec Lightwood. While touring Europe after the Mortal War, they discover a cult that is determined to cause chaos. Wong engages with the gripping tale's accelerating intrigue as Magnus and Alec race across the continent to stop the cult. Wong puts listeners directly in the center of events as the heroes cut it close all the way to the end.
— AudioFile Magazine