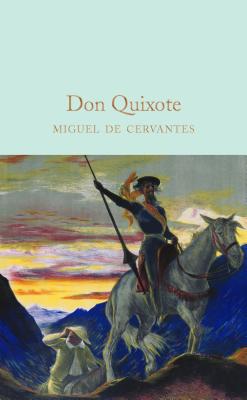 Widely regarded as one of the funniest and most tragic books ever written, Don Quixote chronicles the famous picaresque adventures of the noble knight-errant Don Quixote de La Mancha and his faithful squire, Sancho Panza. Together they journey through sixteenth-century Spain in search of adventure, taking on spirits, evil enchanters and giants in a quest to perform acts of valour worthy of Dulcinea, his lady love.

A masterpiece of world fiction and a brilliant satire on traditional romances, Don Quixote is not only the world’s first modern novel - it is also an uproarious comedy that continues to delight readers today.

This Macmillan Collector’s Library edition is translated by the acclaimed J. M. Cohen and features an afterword by Ned Halley.

Miguel de Cervantes Saavedra was born in Alcalá de Henares, Spain in 1547. Little is known of his early life, other than that he was one of seven children and grew up in poverty. The course of his adulthood is fascinating, at various stages he was a fugitive, a soldier, a tax collector, held captive by pirates, sold as a slave, and imprisoned by the Spanish government. He finally settled into a more sedate life in Madrid shortly after the publication of the first part of his masterpiece, Don Quixote, in 1605. The second part was published in 1615, and Cervantes’ literary output continued until his death in April 1616.
Ned Halley is an award-winning newspaper columnist.