I Am the Storm: My Odyssey from the Holocaust to the Frontiers of Medicine (Hardcover) 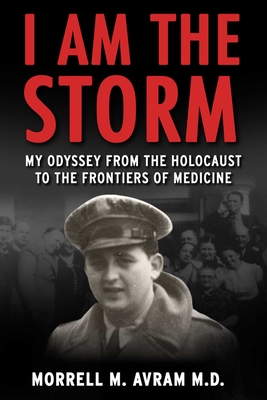 Morrell Avram, born in Bucharest, could have easily become one of the 200,000 Romanian Jews killed by the German Nazis or their Romanian allies. I AM THE STORM is the riveting true story of how he survived—and later triumphed as a pioneering doctor—through a combination of grit and persistence.
At age 11, Avram was separated from his mother and baby sister because the US Embassy would only allow them to immigrate on the condition that they leave Morrell and his father behind. What the family hoped would be a brief separation became six terrifying years. Amid the horrors of the war, Morrell had to fend mostly for himself, shuttling from relative to relative, hiding place to hiding place. Among his close calls: He longed to buy a ticket on the Struma, a ship taking Jewish refugees from Romania to Palestine, that was torpedoed and sank along with many of his friends. He walked into his bar mitzvah ceremony with dozens of Nazi soldiers stationed outside the synagogue. He was strafed and nearly killed by an American warplane. Upon finally escaping Romania and reuniting with his mother and sister, Avram faced a host of new challenges in New York. After getting through high school with minimal English, he was thrilled to get into college but found it impossible to juggle classes while working to help support his family. By age 21, it looked as if his dream of becoming a doctor was doomed. But relief came from an unlikely source—a draft notice from the US Army, which transformed him from an anxious “subway rat” into a focused soldier, driven by the words of his drill sergeant: “You are the storm! You are invincible!” Avram’s unlikely journey continued as a med student in Brussels and Geneva, as a young doctor in Brooklyn, and as one of the leaders of the new field of nephrology. He became a pathbreaking specialist in dialysis and kidney transplants, saving tens of thousands of patients personally and millions more through treatments he helped devise.

Morrell M. Avram, M.D., is a graduate of Long Island University and the University of Geneva. For more than a half century he was affiliated with Long Island Colleage Hospital as an intern, resident, chief resident, Chief of Nephrology, and Professor of Medicine. The founder of the Brooklyn Kidney Center, a leading dialysis center serving hospitals all over the borough, he has spoken at conferences around the world and has written or edited 12 books and more than 150 papers for leading medical journals. Dr. Avram and his wife of nearly 60 years, Maria, have five children and twelve grandchildren.

"I Am the Storm is a gem. The beauty of Morrell Avram's story is more than his improbable success after his family and community were torn apart by Nazi invaders. It is that he turned pain into purpose, bitterness into sweetness. Like my own father, Dr. Avram is proof of the power of love. He conquered his ugly challenges, but they did not corrupt him. They concentrated his resilience and crystallized his sense of compassion. The kid from Romania came to New York City, conquered it, and enriched it. He is a mentor and a role model. This remarkable memoir, like his life, is an inspiration." --Chris Cuomo, host of CNN's Cuomo Prime Time

"How Dr. Avram managed to forge beauty and purpose out of a life begun in cruelty and terror is a testament to his courage, temperament, and to his generous and determined mind, indeed to his soul. A Jewish boy is trapped in Nazi-held Bucharest, where the anti-Semitic savagery of the Romanians is at least equal to that of the Germans. Miraculously he makes it to America, where he becomes a physician and scientist whose imagination and zeal have saved and will continue to save millions of more lives than he saw taken as a boy. Here is a story of redemption at its noblest level, inspired and inspiring." --Roger Rosenblatt, bestselling author of 18 books