Killing Kennedy: Exposing the Plot, the Cover-Up, and the Consequences (Hardcover) 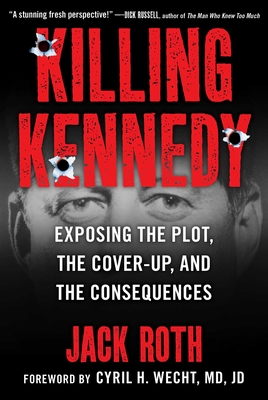 In Killing Kennedy: Exposing the Plot, the Cover-Up, and the Consequences, author Jack Roth interviews researchers, scholars, eyewitnesses, and family members of those who were part of the tangled web of US intelligence operations associated with the Cold War and the circumstances surrounding the assassination of John F. Kennedy. The author asks important questions, including why the assassination still matters today and what the lasting ripple effects have been since that fateful day.

The Kennedy assassination represents one of the most impactful events in not only American but also world history, and this book represents an important addendum to understanding its enduring significance. On November 22, 1963, the duly elected president of the United States was murdered in cold blood, forever destroying “Camelot” and national optimism for world peace.

Gleaning a “people’s history” of the assassination through dozens of insightful and heartfelt interviews, Roth presents a riveting narrative by creating a respectful, well-crafted, and emotionally charged book from which both older and younger generations will gain a greater understanding of our nation’s history and current status in the modern world.

Jack Roth is a journalist, documentary film producer and nonfiction book author. He has produced the award-winning documentary films Extraordinary: The Stan Romanek Story (2013), Extraordinary: The Seeding (2019), and Extraordinary: The Revelations (2021). He is also the author of Ghost Soldiers of Gettysburg (2014) and Unknown Down (2016), books that adeptly explore unexplained phenomena. Jack’s work is driven by his strong desire to seek the truth and share it with others, as this, he believes, will ultimately lead to greater enlightenment and personal freedom for all of humanity. He is a graduate of Boston University (BS, Business Administration) and University of Central Florida (BA, Journalism).

Cyril Wecht is an American forensic pathologist, former president of the American Academy of Forensic Sciences and the American College of Legal Medicine, and author of The JFK Assassination Dissected: An Analysis by Forensic Pathologist Cyril Wecht.

“A stunning fresh perspective!”
—Dick Russell, author of The Man Who Knew Too Much

"This book is a significant contribution to our understanding of the coup that took place in Dallas in 1963. Roth’s focus on the personal journeys of unsung patriots clarifies our quest for democracy."
—Mal Hyman, author, Burying the Lead: The Media and the JFK Assassination, associate professor of sociology, Coker University

“Author, Jack Roth, has collectively pieced together an outstanding and significant manuscript on the study and research of individuals regarding the assassination of President John F. Kennedy, on November 22, 1963. With a handful of exclusively selected and constructed questions, he has captured the hearts and minds of over twenty top researchers, writers, teachers, doctors, lawyers, journalists and film makers who have dedicated their lives in order to keep JFK’s story alive. He has upgraded their continued research and brought most of it from the twentieth century into the twenty-first century. These individuals have continued to pursue a profound sense of truth and justice in American history. Justice cannot be served until we establish the truth behind John Kennedy's murder. America’s heart is in the coffin of President Kennedy!”
—Casey J. Quinlan, American history teacher; author, Beyond the Fence Line, president, Project JFK/CSI Dallas

“After all these years, the official lies about the JFK assassination continue to matter. Jack Roth takes an innovative approach by interviewing a compelling mix of researchers, scholars and witnesses who almost all conclude that not only was President Kennedy murdered in a domestic conspiracy, but that Lee Harvey Oswald was indeed a “patsy,” just as he said he was. After reading Roth’s book, it becomes clear that the JFK assassination ranks with other historical events that served as major turning points for nations and societies, including the assassination of Julius Caesar, the Battle of Gettysburg and others. The dark forces behind the killing of John Fitzgerald Kennedy similarly brought about a fundamental transformation of American society, and by extension the rest of the world. And this was definitely not for the better.”
—Richard Dolan, author, UFOs and the National Security State

“Killing Kennedy is a well-researched, well-written, and thought-provoking expose about history’s darkest day. Jack Roth’s in-depth examination sets the record straight and raises new questions about President’s Kennedy’s murder. The author has uncovered new factoids and laid the foundation for those who continue to seek the truth, offering new directions for future researchers. Roth has demonstrated there is still important work to be done in this complex case. I highly recommend this book.”
—Brian Edwards, MS, criminal justice; JFK assassination researcher and lecturer; author, Beyond the Fence Line; codirector; Project JFK/CSI Dallas

“I was only six weeks old when JFK was assassinated in 1963. The event has been with me my entire life. Today, I continue to dive into anything I can to further my understanding of the events surrounding the president’s murder. Whether it’s Oliver Stone, Jack Roth, or any other researcher bringing fresh information out in the open, we need to do everything we can to reveal the truth about the death of President Kennedy, and this book is a must read in that regard.”
—Jimmy Church, host, FADE to BLACK Game Changer Network; host, The History Channel/A&E Networks

“I found Jack Roth’s new book Killing Kennedy fascinating. In large part it was due to his crisp editing skills, which made the narrative flow easily and very coherently. But, as importantly, because of its rather unique approach and design: He focused on the collective works or experiences of twenty-four people, in as many chapters, divided into seven groups: 1) Five researcher-authors; 2) Three people who were residents of New Orleans in the summer of 1963; 3) Four people whose fathers were in the CIA; 4) Two little girls, now grown up with significant personal stories; 5) Three authors specializing in the Deep State and/or the Fourth Estate; 6) Four authors specializing in Psychological, Philosophical and Social Perspectives; 7) Three people who specialize in keeping the story alive. Combining them into a book that brings the disparate experiences together is an interesting story-telling device.”
—Phil Nelson, author of LBJ: The Mastermind of the JFK Assassination