Dreams for a Decade: International Nuclear Abolitionism and the End of the Cold War (Hardcover) 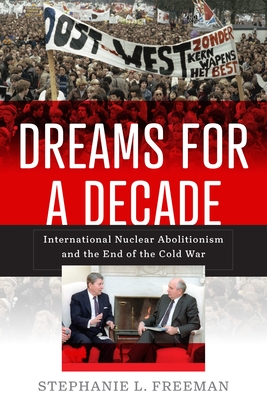 During the 1980s, millions of ordinary individuals around the world mobilized in support of nuclear disarmament. Although U.S. President Ronald Reagan and Soviet General Secretary Mikhail Gorbachev were not part of these grassroots movements, they too wanted to eliminate nuclear weapons. Nuclear abolitionism was a diverse and global phenomenon.

In Dreams for a Decade, Stephanie L. Freeman draws on newly declassified material from multiple continents to examine nuclear abolitionists' influence on the trajectory of the Cold War's last decade. Freeman reveals that nuclear abolitionism played a significant yet unappreciated role in ending the Cold War. Grassroots and government nuclear abolitionists shifted U.S. and Soviet nuclear arms control paradigms from arms limitation to arms reduction. This paved the way for the reversal of the U.S.-Soviet nuclear arms race, which began with the landmark 1987 Intermediate-Range Nuclear Forces Treaty. European peace activists also influenced Gorbachev's "common European home" initiative and support for freedom of choice in Europe, which prevented the Soviet leader from intervening to stop the 1989 East European revolutions. These revolutions ripped the fabric of the Iron Curtain, which had divided Europe for more than four decades. Despite their inability to eliminate nuclear weapons, grassroots and government nuclear abolitionists deserve credit for playing a pivotal role in the Cold War's endgame. They also provide a model for enacting dramatic, positive change in a peaceful manner.