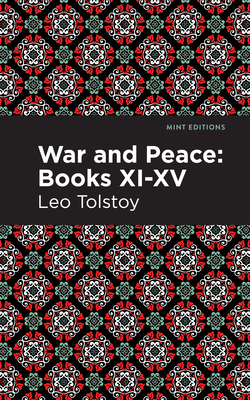 War and Peace (1869) is a novel by Russian writer Leo Tolstoy. Serialized between 1865 and 1867, it was published in book form in 1869 and has since been recognized as a masterpiece of world literature. Notable for its epic scale, War and Peace encompasses hundreds of characters, diligently following its five central families across fifteen years while featuring detailed imaginings of such historical figures as Napoleon Bonaparte. In Books XI-XV, Tolstoy depicts the loss of Moscow, the final struggle against French forces, and the beginning of a new era for Russia, Europe, and the world. French forces under Napoleon Bonaparte leave the Russian military and people with no choice. Not only must they abandon Moscow, they must burn it to the ground in order to slow the Grande Arm e's advance. The Rostov family leaves in a hurry, bringing with them the mortally wounded Prince Andrei, who is nursed by his beloved Natasha. Meanwhile, Pierre hatches a plan to assassinate Napoleon, but is soon captured and threatened with execution. As he awaits his fate in prison, guerrilla fighters manage to repel the French, forcing Napoleon's disastrous retreat. With its depiction of the brutalities of war on individuals and society alike, Tolstoy's story brings history to life while reminding us that the past is always closer than we care to think. As ambitious as it is triumphant, Leo Tolstoy's masterpiece is an epic novel of history and family, a story of faith and the will to persevere in the face of unspeakable catastrophe. War and Peace is a work that transcends both history and description, not just for the scale of its narrative and setting, but for the scope of its philosophical interests. Since its publication, it has been praised as an essential work of literature by Ivan Turgenev, Gustave Flaubert, Thomas Mann, and Ernest Hemingway, and has been adapted for film, theater, and television countless times. With a beautifully designed cover and professionally typeset manuscript, this edition of Leo Tolstoy's War and Peace is a classic of Russian literature reimagined for modern readers.