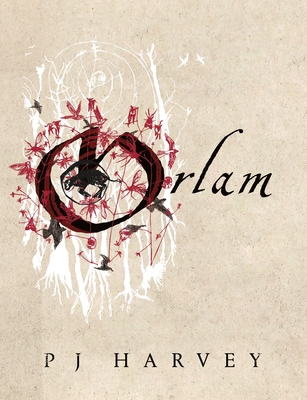 A beautiful and profound narrative poem set in a magic realist version of the West Country by musician and writer PJ Harvey.

Nine-year-old Ira-Abel Rawles lives on Hook Farm in the village of UNDERWHELEM. Next to the farm is Gore Woods, Ira’s sanctuary, overseen by Orlam, the all-seeing lamb’s eyeball who is Ira-Abel’s guardian and protector. Here, drawing on the rituals, children’s songs, chants, and superstitions of the rural West Country of England, Ira-Abel creates the twin realm through which she can make sense of an increasingly confusing and frightening world. Orlam follows Ira and the inhabitants of UNDERWHELEM month by month through the last year of her childhood innocence. The result is a poem-sequence of light and shadow—suffused with hints of violence, sexual confusion and perversion, the oppression of family, but also ecstatic moments in sunlit clearings, song, and bawdy humour.

Orlam is not only a remarkable coming-of-age tale, but the first full-length book written in the Dorset dialect for many decades. Includes a facing-page English translation.

Orlam reveals PJ Harvey as not only one of the most talented songwriters of the age, but a gifted poet—whose formal skill and transforming eye and ear for the lyric line has produced a strange and moving poem like no other.

PJ Harvey was born in Dorset in 1969. Her debut poetry collection, The Hollow of the Hand, was created in collaboration with photographer Seamus Murphy. Her poem ‘The Guest Room’ appeared in The New Yorker. Harvey was awarded an MBE for services to music as well as an Honorary Degree in Music from Goldsmiths University. She has received numerous Grammy Award nominations, has scored music for several tv, film, and theatrical productions, and is the only artist to have won the Mercury Prize twice with her albums Stories from the City, Stories from the Sea and Let England Shake.