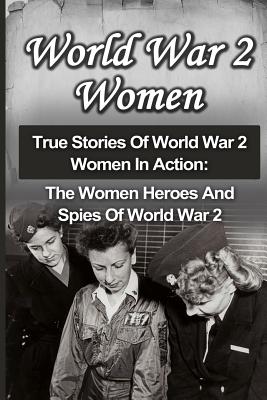 True Stories Of World War 2 Women In Action: The Women Heroes And Spies Of World War 2 From the dawn of time, women have been perceived as the caretakers, as nurturers and as mothers. They are seen as delicate creatures, to be protected and taken care of. Many a time, this argument has served more than one chauvinist who sought to keep the woman bound to his wishes, unable to do anything beyond the quintessential cooking and cleaning and rearing of the children. Yet, given the chance, women have proven themselves time and time again, going above and beyond the call of duty. For all that they are perceived to be the physically weaker of the two accepted sexes, it is the female who carries a full human being within her and it is the female who births that baby and creates life. It was women like these who helped win some of the nastiest wars mankind has ever faced. Both the world wars left an indelible mark on the earth; the face of humanity was forever altered, both during and in the aftermath. Millions lost their lives, and rebuilding was an effort that took decades. There were a number of women who became spies, particularly during the Second World War, sneaking behind enemy lines to gather information and performing other duties to help win the war. These are unsung heroes, often forgotten in the face of their more famous, 'stronger' male counterparts.

Cyrus is a very avid history buff but his biggest joy is the interesting history of our World War's. For the last 2 decades Cyrus has dedicated himself to continue learning and applying his knowledge to his books. His books are written from an angle so as to give the reader maximum entertainment and information in the most effective format. Cyrus believes the more you learn the more you grow, so he always instils that in every book he writes. Cyrus likes to call Ireland home where he spends his spare time hiking and enjoying the countryside with his family. If you love war history then be sure to check out his books below.