Twenty-One Steps: Guarding the Tomb of the Unknown Soldier (Hardcover) 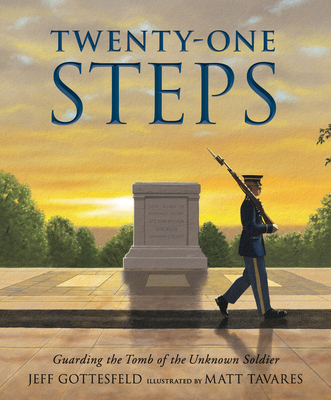 With every step, the Tomb Guards pay homage to America’s fallen. Discover their story, and that of the unknown soldiers they honor, through resonant words and illustrations.

Keeping vigil at the Tomb of the Unknown Soldier, in Arlington National Cemetery, are the sentinel guards, whose every step, every turn, honors and remembers America’s fallen. They protect fellow soldiers who have paid the ultimate sacrifice, making sure they are never alone. To stand there—with absolute precision, in every type of weather, at every moment of the day, one in a line uninterrupted since midnight July 2, 1937—is the ultimate privilege and the most difficult post to earn in the army. Everything these men and women do is in service to the Unknowns. Their standard is perfection.

Exactly how the unnamed men came to be entombed at Arlington, and exactly how their fellow soldiers have come to keep vigil over them, is a sobering and powerful tale, told by Jeff Gottesfeld and luminously illustrated by Matt Tavares—a tale that honors the soldiers who honor the fallen.

Jeff Gottesfeld is an acclaimed writer whose work has won awards from the American Library Association, the Writers Guild of America, and the National Council for the Social Studies. He has previously written for adult, teen, middle-grade, and picture book audiences. Jeff Gottesfeld is based in Los Angeles.

Matt Tavares is the author-illustrator of Crossing Niagara, Henry Aaron’s Dream, There Goes Ted Williams, Becoming Babe Ruth, and Growing Up Pedro, as well as Zachary’s Ball, Oliver’s Game, and Mudball. He is the illustrator of ’Twas the Night Before Christmas, Over the River and Through the Wood, Lady Liberty by Doreen Rappaport, The Gingerbread Pirates by Kristin Kladstrup, and Jubilee! by Alicia Potter. He is also the creator of the modern Christmas tales Red and Lulu and the New York Times bestseller Dasher. Matt Tavares lives in Ogunquit, Maine.

An up-close look at the sentinels who protect and honor America’s fallen...Tavares’ magisterial art soars, awash in opposing forces: shadowed but luminous, soaked in both melancholy and reverence. All sentinels (“men and women of every race, religion, and creed”) take this honor seriously, expressed in the “Sentinel’s Creed” reproduced in the frontmatter. The fallen who have died nameless deserve the very best. This is it. Impeccably honors its subject.
—Kirkus Reviews (starred review)

Gottesfield’s poetic text is in the voice of the first Unknown Soldier, borne by a horse-drawn wagon to Arlington in 1921 and, after a twenty-one-gun salute, laid to rest on the eleventh day of the eleventh month, at the eleventh hour (the time the WWI armistice was signed in 1918)...Published to coincide with the hundredth anniversary of the establishment of the Tomb of the Unknown Soldier, this book is a gorgeous and reverent tribute both to veterans and to the Tomb Guards.
—The Horn Book (starred review)

The respectful personalization of the unknown soldier and the specificity of the ritual that is now witnessed by Arlington visitors are a potent draw for primary to middle grade audience, and Tavares’ pencil and digitally painted artwork captures many facets of the narration...A closing note offers supplemental information on Arlington and tombs of the unknown from subsequent wars as well as some hints for tracking down further details.
—Bulletin of the Center for Children's Books

This title is a tribute to the nameless fallen soldiers and the sentinels who guard the Tomb of the Unknown Soldier in Arlington National Cemetery...The main text provides a history and reverence for the dedication and exactitude of the guards who pace in precise intervals, every hour of every day... This book’s message of selflessness is as clear as the click of the metal-studded heels of sentinels walking their appointed steps.
—School Library Journal