Suffragette: The Battle for Equality (Hardcover) 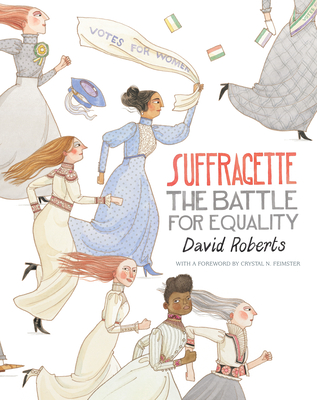 A New York Times best-selling illustrator turns his talents to a lavish history of the women’s suffrage movement in the U.K. and the U.S. just in time for the hundredth anniversary of the Nineteenth Amendment.

Imprisonment, hunger strikes, suffrajitsu — the decades-long fight for women’s right to vote was at times a ferocious one. Acclaimed artist David Roberts gives these important, socially transformative times their due in a colorfully illustrated history that includes many of the important faces of the movement in portraiture and scenes that both dignify and enliven. He has created a timely and thoroughly engaging resource in his first turn as nonfiction author-illustrator. Suffragette: The Battle for Equality follows the trajectory of the movement in the U.K. and visits some key figures and moments in the United States as it presents the stories of Millicent Garrett Fawcett, Emmeline Pankhurst, Ida B. Wells, Susan B. Anthony, and many more heroic women and men — making it a perfect gift for young readers of today. Dr. Crystal Feimster of Yale’s Department of African American Studies contributes a foreword that speaks to the relationship and differences between the British and American suffrage efforts.

David Roberts is the illustrator of The Dunderheads by Paul Fleischman, The Dumpster Diver by Janet S. Wong, and His Royal Highness, King Baby by Sally Lloyd-Jones. He also illustrated the New York Times best-selling Rosie Revere, Engineer and the other books in the Questioners series by Andrea Beaty. David Roberts has held a lifelong interest in the women’s suffrage movement. He lives in London.

This cleareyed, evenhanded presentation gives the overall story a veracity that lets shine the bravery of all the women (and men) who were ridiculed, imprisoned, force-fed, and beaten for their determination to win the franchise. This compelling story of determination and persistence can't help but inspire today's readers.
—Kirkus Reviews (starred review)

Roberts’s (Rosie Revere, Engineer) handsomely illustrated history of the battle for women’s suffrage in the U.K. and the U.S. makes its American debut in time for the 100th anniversary of the 19th Amendment...Vignettes of female suffragists from around the world and a bibliography wrap up this engaging, stirring chronicle.
—Publishers Weekly (starred review)

This book is a great historic guide to women’s fight for voting privileges and equal citizenship in the UK. The suffragettes fought hard until they won, even if some did not live to see their victory! The illustrations are funny and help breathe life into this nonfiction text.
—School Library Connection