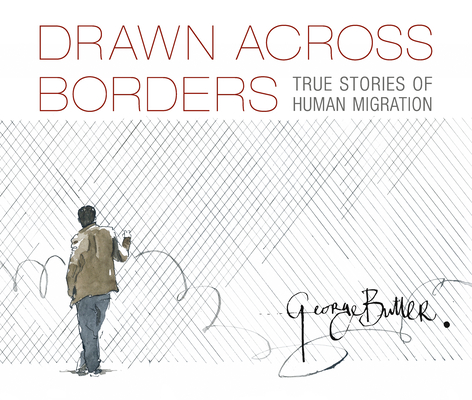 From a celebrated documentary artist, twelve portraits from the front lines of migration form an intimate record of why people leave behind the places they call home.

It is an unusual feeling to walk into a place that everyone is leaving . . .

Resisting his own urge to walk away, award-winning artist George Butler took his sketchbook and made, over the course of a decade, a series of remarkable pen-and-ink and watercolor portraits in war zones, refugee camps, and on the move. While he worked, his subjects—migrants and refugees in the Middle East, Europe, Africa, and Asia—shared their stories. Theirs are the human stories behind the headlines that tell of fleeing poverty, disaster, and war, and of venturing into the unknown in search of jobs, education, and security. Whether sketching by the hospital bed of a ten-year-old Syrian boy who survived an airstrike, drawing the doll of a little Palestinian girl with big questions, or talking with a Masai herdsman forced to abandon his rural Kenyan home for the Kibera slums, George Butler turns reflective art and sensitive reportage into an eloquent cry for understanding and empathy. Taken together and elegantly packaged, his beautiful portraits form a moving testament to our shared humanity—and the universal urge for safety and a better life.

George Butler is an award-winning artist and illustrator specializing in travel and current affairs. He has reported on migration and conflicts in the Middle East, Europe, Africa, and Asia, and his drawings have been published by the New York Times, the Times (London), BBC, the Guardian, and elsewhere. In 2014, with three friends, George created the Hands Up Foundation to remind the people they had met in Syria that they had not been forgotten.

This is a work of art, compassion, and activism, with journalist and illustrator Butler using his craft to bear witness to and build awareness of the effects of war on civilians whose lives are treated as mere collateral for those in power. . .In this visually stunning volume, Butler uses sharply defined ink lines to create the contours of people and landscapes, and washes of watercolor that bleed into one another add depth and context. A powerful work of skill and sensibility.
—Booklist (starred review)

From the Middle East, Kenya, Tajikistan, Eastern Europe, and Myanmar, Butler shares stories of migration that put a human face on a global phenomenon. . .The spare, penetrating ink sketches portray facts and convey emotions in a way that allows readers to see through the artist’s eyes. . .The range of migration experiences covered is impressive. In addition to displacement across borders, it includes less-discussed topics—internal displacement; refugees who return to still-struggling home countries; and a section on Palestine and the right to movement—all without failing to note that migration has existed for centuries. Together, text and art portray their dreams, the burdens they carry, and the uncertainty they experience. An exquisite piece of journalism imbued with care.
—Kirkus Reviews (Starred Review)

Between 2011 and 2018, British artist and reporter Butler traveled to a dozen locations where people have been forced by circumstances beyond their control to leave their homes, documenting in words and pictures the individuals and environments he encountered. The result is an elegant, spare, and moving collection of histories that are coupled with muted pen-and-ink and watercolor images. . .The landscapes, cityscapes, and portraits are predominantly illustrated in varying shades of gray and brown with occasional spots of color, creating an affecting and somber ambiance.
—Publishers Weekly

This book provides readers with a glimpse into the lives of refugees, focusing mostly on people from Asia. The author tries to give the reader a look at why and how people are compelled to leave everything and move to another place in the world. . . . Although the book is written for younger children, it might be read by high school students who want to know more about refugees. The artwork might serve as a draw for older students as well.
—School Library Connection