The Con and the FBI Agent: An Unlikely Alliance (Hardcover) 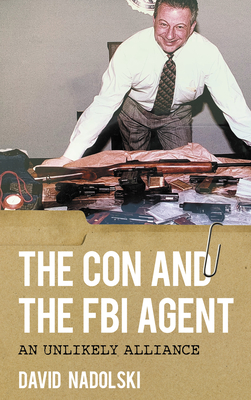 While FBI Agent David Nadolski risked his career, his informant, Anthony Romano risked his life to quash one of the biggest armed robberies of the twentieth century. During the 1990's Boston was a world leader in arts, culture, higher education, and medicine. It was also a world leader in organized crime. In this exciting account, former FBI supervisory special agent David Nadolski tells the story of an unlikely alliance between two diametrically opposed people-the con and the FBI agent. While investigating a break-in at the Stone Library in Quincy, MA that houses the personal book collection of John Quincy Adams, the FBI gets a call from prison inmate, Anthony (Tony) Romano, requesting to meet with the case agent on the burglary. Romano provides a helpful tip that leads to the apprehension of the thief and the recovery of four priceless, historically significant books. Recognizing Tony's potential, Nadolski begins to cultivate a relationship in hopes of recruiting Romano as a criminal informant. Nadolski recruits Romano to play a very dangerous game-infiltrate the Merlino gang, controlled by Carmello Merlino, a career criminal who specialized in bank robberies, armored car robberies, and home invasions. The Merlino gang also became suspects in the largest art theft in history which took place at the Isabella Stuart Gardner Museum in Boston and remains unsolved to this day. Romano, a former armed robber, agrees. With sights set on the Loomis Fargo Armored Car Company money vault, located south of Boston, the Merlino gang gets to work. Little did they know, Romano, at great personal risk, was a wearing a wire and recording their planning sessions. After two years of being joined at the hip and learning to trust each other unconditionally, special agent Nadolski and Romano run a successful criminal investigation and undercover sting operation to catch four dangerous criminals poised to launch one of the biggest armed robberies of the twentieth century.

David Nadolski is a retired supervisory special agent of the Federal Bureau of Investigation. During his twenty-one year FBI career, Nadolski investigated violent crimes, gang activity, foreign counter-intelligence cases, public corruption, and fraud against the government cases. He was a member of the Boston FBI Evidence Response Team (ERT) and travelled internationally and domestically to investigate terrorist bombings. He retired from the FBI in 2004 and moved to Cape Cod, Massachusetts. He appeared in the Netflix hit series, "This Is A Robbery" plus the WBUR/Boston Globe podcast Last Seen; author Jerri Williams podcast FBI: Retired Casefile Review and Steve Gould's podcast Things Police See: First Hand Account.