When Women Stood: The Untold History of Females Who Changed Sports and the World (Hardcover) 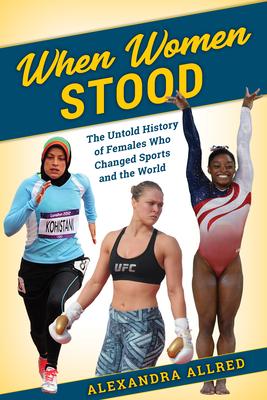 An unapologetically candid and illuminating history of women and their fight for equality, told through the influential world of sports. From early Amazons to modern-day athletes, women have been fighting for their rightful place in the world. The history of these female athletes--whether warriors on the battlefield or competitors in the sports arena--has often been neglected, yet it is through sports that women have changed society, gaining entry into education, travel, politics, and more. When Women Stood: The Untold History of Females Who Changed Sports and the World is an eye-opening chronicle of the amazing women who refused to accept the status quo and fought for something better for themselves and for those who would follow. It includes the stories of female football players, Olympic athletes, powerlifters, and soccer stars, of historians, archeologists, crusaders, and scientists. It also reveals the surprisingly interwoven history of women's fashion, scientific advances, feminine ideals, and more. Women's sports history cannot be told without also telling the story of the fight for gender and racial equality, economics, medical biases, gay and transgender history, violence, religion, media, abuse, and activism. When Women Stood is the first to go beyond the record books and gold medal counts to truly dig into the vital role women and sports have played in instigating change in society as a whole. And it shows that, despite seemingly unsurmountable odds, the true spirit of the female athlete can never be restrained.

Alexandra Allred is a former professional athlete who made sports history when she won the first-ever U.S. Women's Bobsled Championship when she was over four months pregnant. A former fighter and fourth degree black belt, Allred has been teaching martial arts, self-defense and mainstream fitness classes for over 25 years. She is the author of the award-winning book Atta Girl! A Celebration of Women in Sport. Today, she is an adjunct professor and researcher of sports and exercise science. For more, please visit www.alexandraallred.com.