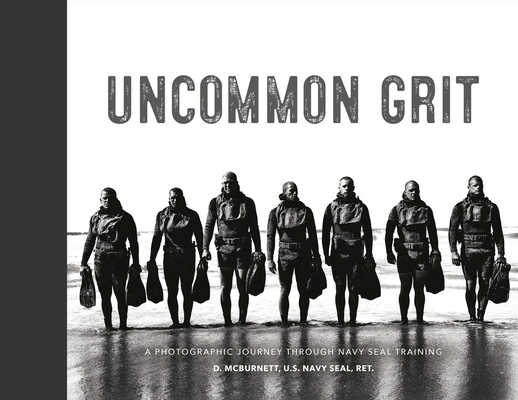 Striking, beautiful, and haunting, Uncommon Grit takes a unique, unprecedented look at the toughest training in the military -- and the world -- from the vantage point of someone who lived through it. Retired Navy SEAL Darren McBurnett includes vivid descriptions of both the physical and mental evolutions that occur as a result of the immensely challenging SEAL training process.

His stunning photographs, partnered with his compelling insights and sharp sense of humor, allow the reader to laugh, cringe, gasp, and even envision themselves going through this extraordinary experience.

"No book I've ever seen captures the essence of SEAL training quite like UNCOMMON GRIT. It is visually stunning, with amazing photos that bring out the pain, the exhaustion, the determination, the camaraderie, and the ultimate satisfaction of completing the world toughest military training. If you want to know what SEAL training is all about -- this book is for you."—Admiral William H. McRaven (U.S. Navy SEAL, Ret.), #1 New York Times bestselling author of Make Your Bed and Sea Stories

"McBurnett's artistry elevates the training of warriors with a mixture of bracing realism and cinematic romanticism, appealing as much to fine photography fans as the military crowd."—Publishers Weekly (Starred Review)

"This is as close as you can get to being a Navy SEAL without being there. I still get goosebumps every time I look at this book. These are the same training evolutions that every Navy SEAL has gone through since inception and will be forever. McB has captured this torture and made it beautiful; which it is. It was the worst time of my life. It was the best time of my life. And it's all here."—Robert O'Neill, Navy SEAL Veteran, SEAL Team Six, and New York Times bestselling author of The Operator: Firing the Shots That Killed Osama bin Laden and My Years as a SEAL Team Warrior

"UNCOMMON GRIT is a unique look into what it takes to become a Navy SEAL. From Hell Week through all of the evolutions, McB gives us his perspective on how he was able to overcome the pain, disorientation and frustration, and lack of sleep to finish BUD/S training. All the photos of the men going through the different evolutions gives us a little taste of how hard it really is to become an elite warrior. I salute all who have tried and especially those like McB who were able to graduate and go on to defend our country. I'm in awe of people like McB who put everything on the line for us here in the USA and I'm honored to call him my friend."—Jim McMahon, Hall of Fame NFL Quarterback, Super Bowl Champion

"The images in this book will vividly remind every American of the unyielding determination of our military to defend life, liberty, and the pursuit of happiness!"—John Rich, singer-songwriter, Big & Rich

"UNCOMMON GRIT is a book of how hard our men and women fight to give us our freedom in the greatest country on Earth."—John Daly, professional PGA Golfer

"Nothing has or will ever come close to this trip down memory lane. McB has somehow managed to capture the true essence of BUD/S by showing the trials and tribulations, victories and defeats of what these men actually go through -- of what we went through. You can see the men being forged into steel right before your eyes. As a SEAL I can only say 'Hooyah' and thank you frogmen for this."—Ray "Cash" Care, Navy SEAL Veteran

"McBurnett makes you feel the cold of the surf, the chafing grit of sand, and the length of the day. UNCOMMON GRIT is an uncommon work of art documenting a little-seen aspect of the forces that keep us safe."—Booklist

"UNCOMMON GRIT is no less uncommon. It is a battle-line view that many outside of the SEAL program do not have the privilege of seeing. With the experience of author D. McBurnett, U.S. Navy SEAL Ret., we get a glimpse through his lens of pure, unadulterated hell during this military arm of self-evaluation and survival. Both physically and mentally challenged with endless exhaustion combined with limited resources to cope, these unique men achieve a goal many aren't suited to attain. It is an exceptional tribute to the men who complete the training and become elite war fighters. I highly recommend picking up a copy wherever available!"—Lorenzo Lamas

"Nothing helps a civilian understand BUD/S better than UNCOMMON GRIT. The photos truly capture the toughness and fortitude that the men who go through Hell Week possess. It allowed me to visualize the stories someone close to me told, and actually see what he went through during training. Reading stories is one thing, and hearing them is another. But SEEING exactly what that kind of training is like is just mind boggling to a civilian. Just looking at the photos makes you truly appreciate the sacrifice that our service men and women, especially those in Special Operations, make -- not only overseas, but also in the preparation they do at home. I cannot thank McB enough for taking these photos, sharing these stories and captions, and most importantly, giving me the opportunity to learn."—Dan Vitale III, NFL fullback, New England Patriots