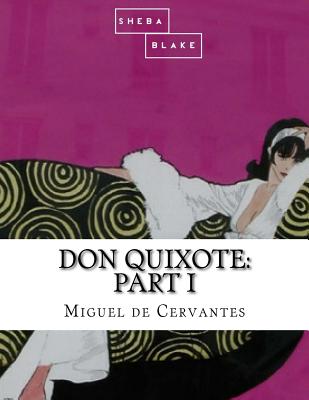 This is book number 1 in the Don Quixote series.

Don Quixote is a Spanish novel by Miguel de Cervantes Saavedra. Published in two volumes, in 1605 and 1615, Don Quixote is considered the most influential work of literature from the Spanish Golden Age and the entire Spanish literary canon. As a founding work of modern Western literature and one of the earliest canonical novels, it regularly appears high on lists of the greatest works of fiction ever published, such as the Bokklubben World Library collection that cites Don Quixote as authors' choice for the "best literary work ever written". The story follows the adventures of an hidalgo named Mr. Alonso Quixano who reads so many chivalric romances that he loses his sanity and decides to set out to revive chivalry, undo wrongs, and bring justice to the world, under the name Don Quixote de la Mancha. He recruits a simple farmer, Sancho Panza, as his squire, who often employs a unique, earthy wit in dealing with Don Quixote's rhetorical orations on antiquated knighthood. Don Quixote, in the first part of the book, does not see the world for what it is and prefers to imagine that he is living out a knightly story. Throughout the novel, Cervantes uses such literary techniques as realism, metatheatre, and intertextuality. It had a major influence on the literary community, as evidenced by direct references in Alexandre Dumas' The Three Musketeers (1844), Mark Twain's Adventures of Huckleberry Finn (1884) and Edmond Rostand's Cyrano de Bergerac (1897), as well as the word "quixotic" and the epithet "Lothario". Arthur Schopenhauer cited Don Quixote as one of the four greatest novels ever written, along with Tristram Shandy, La Nouvelle H lo se and Wilhelm Meister. Cervantes said the first chapters were taken from "The Archive of La Mancha", and the rest were translated from Arabic by the Moorish author Cide Hamete Benengeli. This metafictional trick appears to give a greater credibility to the text, implying that Don Quixote is a real character and that the story truly occurred several decades back. However, it was also common practice in that era for fictional works to make some pretense of being factual, such as the common opening line of fairy tales "Once upon a time in a land far away...