War of the Foxes (Paperback) 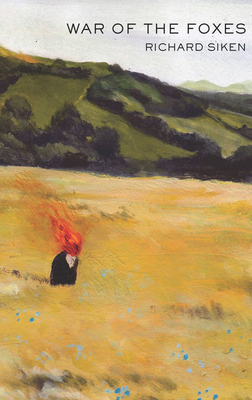 "This may be the most anticipated poetry book of the last decade...expect it to haunt you."--NPR.org

In reviewing Richard Siken's first book, Crush, the New York Times wrote that "his territory is where] passion and eloquence collide and fuse." In this long-awaited follow-up to Crush, Siken turns toward the problems of making and representation, in an unrelenting interrogation of our world of doublings. In this restless, swerving book simple questions--such as, Why paint a bird?--are immediately complicated by concerns of morality, human capacity, and the ways we look to art for meaning and purpose while participating in its--and our own--invention.

* "Slippery, magnetic riffs on the arbitrary divisions made by the human mind in light of the mathematical abstractions that delete them; poetry lovers will want to read."--Library Journal, starred review

" P]oems of passion, examining what it means to love, to be, and to create."--Vanity Fair

"Siken's stark, startling collection focuses tightly on both the futility and the importance of creating art."--Booklist

"Poems primarily about painting and representation give way to images that become central characters in a sequence of fable-like pieces. Animals, landscapes, objects, and an array of characters serve as sites for big, human questions to play out in distilled form. Siken's sense of line has become more uniform, this steadiness punctuated by moments of cinematic urgency."--Publishers Weekly

"War of the Foxes builds upon the lush and frantic magic of Richard Siken's first book, Crush. In this second book, Siken takes breathtaking control of the rich, varied material he has chosen...Siken paints and erases--the metaphor of painting with words allows him to leave those traces that mostly go unseen. He is the Trickster. If paint/then no paint. He does this with astonishing candor and passion."--The Rumpus

Two lovers went to the museum and wandered the rooms.
He saw a painting and stood in front of it
for too long. It was a few minutes before she
realized he had gotten stuck. He was stuck looking
at a painting. She stood next to him, looking at his
face and then the face in the painting. What do you
see? she asked. I don't know, he said. He didn't
know. She was disappointed, then bored. He was
looking at a face and she was looking at her watch.
This is where everything changed . . .

Richard Siken is a poet, painter, and filmmaker. His first book, Crush, won the Yale Younger Poets' prize. He lives in Tucson, Arizona.