The Sacred and the Profane (Paperback) 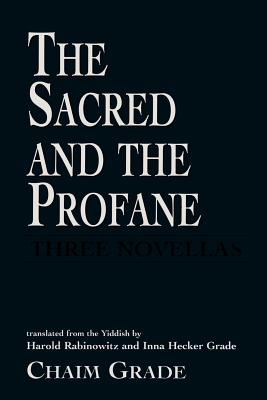 By Chaim Grade
This item is backordered and not currently available. Please contact us for an estimated availability date.

These three superb novellas by the internationally celebrated Chaim Grade reaffirm his reputation as one of the greatest, if not the greatest, Yiddish writers of our time. Combining the richness of character and the moral concern that have consistently marked Grade's work, these stories offer a luminous picture of Jewish life in Lithuania between the two world wars, with its everyday problems and its spiritual yearnings. The characters portrayed will strike responsive chords in today's readers. 'The Rebbetzin' is the account of an ambitious woman who constantly pushes forward her scholarly husband, with the image always before her of the more eminent rabbi to whom she was once betrothed. In 'Laybe-Layzar's Courtyard' Grade gives us the people of a crowded Jewish neighborhood in Vilna, among them a fanatical pietist, a restless playboy and his vindictive wife, and a rabbi who finds that he cannot escape the yoke of the rabbinate or involvement in the destinies of others. In 'The Oath' a dying merchant extracts a series of pledges from his wife and children that will profoundly alter the course of their lives.

Chaim Grade, who died in 1982, was the author of numerous works of prose and poetry in Yiddish. Some of these have been translated into English including the novels The Yeshiva, The Agunah, The Well, and The Seven Little Lanes, a memoir of the Holocaust. His first work of prose to appear in English was the philosophical dialogue My Quarrel with Hersh Rasseyner. Born in Vilna, Lithuania, in 1910, Mr. Grade came to the United States in 1948 and lived in New York City with is wife, Inna. He received many prizes and awards, including the B'nai B'rith Jewish Heritage Award for Excellence, the Morris Adler Prize of the American Academy of Jewish Research, and the Remembrance Award of the World Federation of Bergen-Belsen Associations.