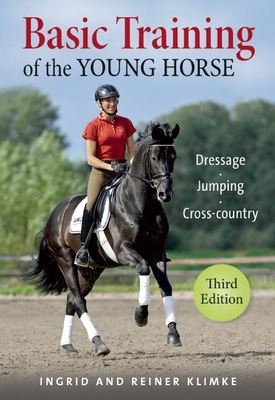 This new edition of the highly regarded international bestseller illustrates the correct way to establish a sound, versatile training foundation in a young horse. Reiner Klimke's self-trained horses went on to achieve success at the highest levels in several disciplines, many of them becoming World Champions.

Here, based on his extensive experience, he advises the reader on the early education of the foal, longeing and freework, progressive training under saddle, and eventual preparation for competition. Now enhanced with all new color photos and helpful tips from his daughter, Ingrid -- a respected rider and competitor in her own right -- is poised to again become the modern standard on horse training.

Ingrid Klimke is a former international trainer of dressage, show jumping, and event horses, and currently competes for Germany as an event rider. She had always been able to call on her father's experiences but has also been greatly influenced by Fritz Ligges, Ian Miller, and Anne Kursinski. She appeared at four Olympics, from 2000 to 2012. With her horse Abraxxas, she has won two gold medals in team eventing, at the 2008 Summer Olympics and the 2012 Summer Olympics. In January 2012, she was promoted to a "Reitmeister" (Riding Master, a special title of the German Equestrian Federation). Klimke is the second woman ever to be promoted as "Reitmeister". Reiner Klimke (1936-1999), one of the most famous and successful dressage riders of all time won Olympic Dressage team gold medals in 1964, 1968, 1976, 1984, 1988, and the individual gold in 1984 on his most famous horse, Ahlerich. Early in his riding career he competed in eventing and was a member of the winning West German three-day event team at the 1959 European Championships, and competed for West Germany in the 1960 summer Olympics. Klimke not only rode and trained, but also ran a law firm and served on several boards, including the FEI Dressage Committee. With his wife, Ruth (also a top show jumping and dressage rider), he had 3 children: Ingrid, Rolf, and Michael. His daughter Ingrid Klimke competes successfully at the international level in eventing and dressage and won an eventing gold at the 2008 summer Olympics twenty years after her father's last Olympic gold medal. His son Michael also competes at the Grand Prix level in dressage. Klimke died at age 63 in Munster, Germany.