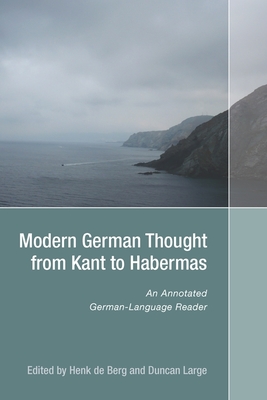 The first book that presents key original texts from the modern German philosophical tradition to English-language students and scholars of German, with introductions, commentaries, and annotations that make them accessible.
German-language thinkers such as Kant, Marx, Nietzsche, and Freud are central to modernity. Yet their reception in the English-speaking world has largely depended on translations, a situation that has often hampered full engagement with the rhetorical and philosophical complexity of the German history of ideas. The present volume, the first of its kind, is a response to this situation. After an introduction charting the remarkable flowering of German-language thought since the eighteenth century, it offers extracts - in the original German - from sixteen major philosophical texts, with extensive introductions and annotations in English. All extracts are carefully chosen to introduce the individual thinkers while allowing the reader to pursue broader themes such as the fate of reason or the history of modern selfhood. The book offers students and scholars of German a complement to linguistic, historical, andliterary study by giving them access to the wealth of German-language philosophy. It represents a new way into the work of a succession of thinkers who have defined modern philosophy and thus remain of crucial relevance today. The philosophers: Immanuel Kant, G. W. F. Hegel, Ludwig Feuerbach, Karl Marx, Arthur Schopenhauer, Friedrich Nietzsche, Sigmund Freud, Martin Heidegger, Walter Benjamin, Georg Luk cs, Max Horkheimer and Theodor Adorno, J rgen Habermas. Henk de Berg is Professor of German at the University of Sheffield. Duncan Large is Professor of European Literature and Translation at the University of East Anglia.