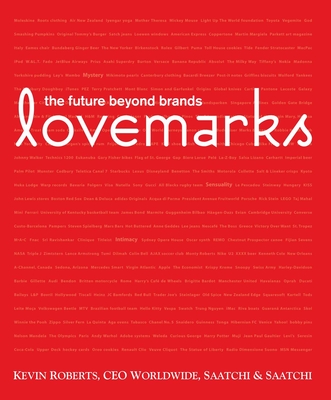 "Ideas move mountains, especially in turbulent times. Lovemarks is the product of the fertile-iconoclast mind of Kevin Roberts, CEO Worldwide of Saatchi & Saatchi. Roberts argues vociferously, and with a ton of data to support him, that traditional branding practices have become stultified. What's needed are customer Love affairs. Roberts lays out his grand scheme for mystery, magic, sensuality, and the like in his gloriously designed book Lovemarks."
-Tom Peters

Tom Peters, one of the most influential business thinkers of all time, described the first edition of Lovemarks: the future beyond brands as "brilliant." He also announced it as the "Best Business Book" published in the first five years of this century. Now translated into fourteen languages, with more than 150,000 copies in print, Lovemarks is back in a revised edition featuring a new chapter on the peculiarly human experience of shopping.

The new chapter, "Diamonds in the Mine," is an insightful collection of ideas for producers and consumers, for owners of small stores and operators of superstores. So forget making lists! Shopping, says Kevin Roberts, is an emotional event. With this as a starting point, he looks at the history of shopping and how it has changed so dramatically over the last ten years. Using the Lovemark elements of Mystery, Sensuality, and Intimacy, Roberts delves into the secrets of success that can be used to create the ultimate shopping experience.

Kevin Roberts is a creative business leader and iconoclast whose current career roles include Executive Chairman of Saatchi & Saatchi, one of the world's most iconic advertising brands, and Head Coach of Publicis Groupe, the world's third largest communications group. He was previously CEO Worldwide of Saatchi & Saatchi (1997-2014), and has held leadership positions at Gillette, Procter & Gamble and Pepsi-Cola throughout the world. His business books include the groundbreaking Lovemarks: The Future Beyond Brands (powerHouse Books, 2004) published in 18 languages. Kevin Roberts is Honorary Professor of Creative Leadership at Lancaster University, Honorary Professor of Innovation and Creativity at the University of Auckland Business School, and Honorary Professor of Leadership and Innovation at the University of Victoria (B.C.) School of Business. He advises national organizations and global brands across commerce, media and sport. He lives in New York City and Arizona USA, Auckland New Zealand, and Grasmere in England's Lake District. In 2013 he was made Companion of the New Zealand Order of Merit.