Love and Terror in the God Encounter: The Theological Legacy of Rabbi Joseph B. Soloveitchik (Paperback) 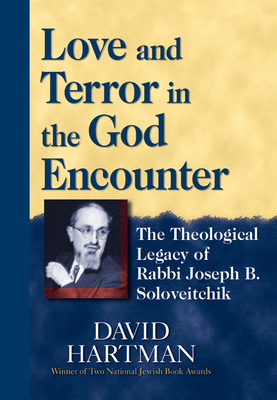 The intellectual legacy of one of the twentieth century's greatest religious thinkers--explained by a leading theologian of our day.

"It is only through experiencing the contradictions in human existence, through being overwhelmed by the divine presence, through the finite human being feeling terror-stricken by the infinite majesty of God that one can develop an authentic religious personality."
--David Hartman (From Chapter 6)

Rabbi Joseph B. Soloveitchik (1903-1993) profoundly influenced modern Orthodox Judaism in the United States--and Judaism as a whole--by opening up a discourse between the tradition of Torah study and Western philosophical thought. The future of both religious Zionism in Israel and of Orthodoxy in America hangs to a great extent on how we interpret his intellectual legacy. Dr. David Hartman's penetrating analysis of Rabbi Soloveitchik's work reveals a Judaism committed to intellectual courage, integrity and openness.

A renowned theologian and philosopher, Hartman meticulously explores the subtlety and complexity of Rabbi Soloveitchik's theological thought, exposing a surprising intersection of halakhic tradition and modern Western theology--a confrontation that deepens and expands our spiritual understanding. Hartman's provocative interpretation bears witness to the legitimacy of remaining loyal to the Judaic tradition without sacrificing one's intellectual freedom and honesty.