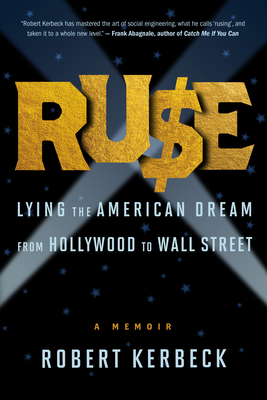 “Kerbeck’s juicy memoir tells riveting tales [with] the thrill of a spy novel. . . Kerbeck bares all of his wild business secrets within the world of corporate espionage” --Foreword Reviews

"Robert Kerbeck has mastered the art of social engineering, or what he calls 'rusing', and taken it to a whole new level."  —Frank Abagnale, author of Catch Me If You Can

In the world of high finance, multibillion-dollar Wall Street banks greedily guard their secrets. Enter Robert Kerbeck, a working actor who made his real money lying on the phone, charming people into revealing their employers’ most valuable information. In this exhilarating memoir that will appeal to fans of The Wolf of Wall Street and Catch Me If You Can, unsuspecting receptionists, assistants, and bigshot executives all fall victim to “the Ruse.”

After college, Kerbeck rushed to New York to try to make it as an actor. But to support himself, he’d need a survival job, and before he knew it, while his pals were waiting tables, he began his apprenticeship as a corporate spy.

As his acting career started to take off, he found himself hobnobbing with Hollywood luminaries: drinking with Paul Newman, taking J.Lo to a Dodgers game, touring E.R. sets with George Clooney. He even worked with O.J. Simpson the week before he became America’s most notorious double murderer.

Before long, however, his once promising acting career slowed while the corporate espionage business took off. The ruse job was supposed to have been temporary, but Kerbeck became one of the world’s best practitioners of this deceptive—and illegal—trade. His income jumped from tens of thousands to hundreds of thousands to millions of dollars a year.

Until the inevitable crash…

Kerbeck shares the lies he told, the celebrities he screwed (and those who screwed him), the cons he ran, and the money he made—and lost—along the way.

Robert Kerbeck is the founder of the Malibu Writers Circle and his essays and short stories have been featured in numerous magazines and literary journals, including Narratively, Cimarron Review and Los Angeles Magazine. His short story, "Reconnected", was adapted into an award-winning film and has appeared at film festivals worldwide. He is a lifetime member of The Actors Studio and an award-winning actor. He is also the author of Malibu Burning: The Real Story Behind LA's Most Devastating Wildfire.

“Robert Kerbeck flopped as an actor. But, as a corporate spy, he gave Oscar-worthy performances.”
--Michael Kaplan, New York Post

“A story almost too good to be true with no shortage of wild stories, Kerbeck winds every detail into an engaging, entertaining memoir."
--Shondaland

"The book is gripping as it chronicles Kerbeck’s disdain for working at his family’s car business, his quiet acting career, and his descent into his moves against big businesses. The details of his sleuthing work are meticulous, but the book still maintains the thrill of a spy novel. Celebrity name-drops add flair to this tale of calculated crimes"
--Foreword Reviews

"With enjoyable, au currant language, and a sharp ear for dialogue, Kerbeck’s astounding story is fraught with tension, written in a voice both confident and accessible throughout an insider’s memoir so finely wrought, it reads somewhere between a heart-pounding thriller and an intriguing, finely tuned spy novel."
--New York Journal of Books

“An irresistible portrait of actors and grifters in the work-a-day world of corporate espionage.”
--Jess Walter, author of the New York Times #1 bestseller Beautiful Ruins

"Ruse is a Tale of Two Lives: Kerbeck's acting career and his fascinating life as a corporate con man/spy. If you like celeb gossip, you’ll go for the first, but I prefer the second since it exposes the very dark, greedy, narcissistic side of Wall Street and Big Business in general. Kerbeck out-cons the top con-artists -- sophisticated CEOs. And he does it over the phone. Wow! In my day I had to fly around the world!"
--John Perkins, New York Times bestselling author of Confessions of an Economic Hit Man

"Ruse lives at a truly unique intersection of Hollywood meets Wall Street, and I found myself laughing with and rooting for Robert throughout this book. His personality leaps off the page — he’s a great storyteller and Ruse is a can’t miss best seller."
--Rob Golenberg, Executive Producer of the critically acclaimed Showtime series Your Honor

"In Ruse, Robert Kerbeck reveals himself to be a scoundrel, a raconteur, and a masterful storyteller. In the course of becoming an unlikely corporate intelligence spy, his various masks are so seamless that readers are swept along in his mythic transformation. Sometimes, memoirs become self-involved and forget to give readers a good story. Not here. What other book features a narrator attending a soiree at Paul Newman’s Manhattan apartment, and appearing in an O.J. Simpson exercise video? And that’s just for starters. This compelling page-turner is both insightful and an absolute hoot.”
--Sue William Silverman, author of How to Survive Death and Other Inconveniences

"Robert Kerbeck’s memoir, Ruse, is a riveting tale of desire and deception in a world where lies are necessary currency and where con artists can end up convincing everyone, even themselves. Ruse offers a fascinating portrait of a life negotiated through a web of fabrications."
--Lee Martin, Pulitzer Prize Finalist and author of Gone the Hard Road

“I loved Ruse! What a crazy story, and believe me, I know crazy. Successful spies are great storytellers, and Robert Kerbeck ranks up there with the best of them."
--Valerie Plame, author of Fair Game: My Life as a Spy, My Betrayal by the White House

"A deliciously outrageous, you-can’t-make-this-shit-up caper. Kerbeck takes us on his unlikely transformation from almost-a-star actor to multi-millionaire corporate sleuth. As it turns out, you don’t need to climb the greasy rungs of the ladder to make a killing; all you need is a telephone and your wits.”
--Erik Edstrom, author of Un-American: A Soldier’s Reckoning of Our Longest War