The Five Capitals of Alabama: The Story of Alabama's Capital Cities from St. Stephens to Montgomery (Hardcover) 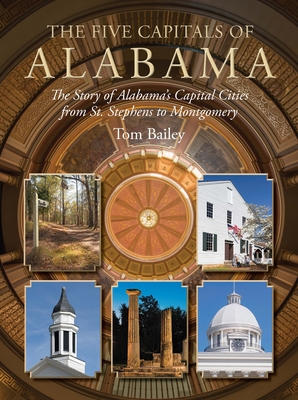 The story of Alabama's five capitals--St. Stephens, Huntsville, Cahawba, Tuscaloosa, and Montgomery--begins in a rough semi-civilized Washington County village and ends at the old cotton town in central Alabama. Between these bookending governmental centers, the capitals have criss-crossed the state from north to south and east to west, following the political powers and fortunes of the times, and amid more noble arguments that the capital should be near the center of the state. It is the story of Alabama's government, buildings, and laws. It is the story of towns, some that sprang up and died when the capital moniker left. Most of all, the story of Alabama's capitals is the story of its people: some whose undying devotion to statehood brought Alabama to life; some who used state government in their rise to power and financial prominence; some whose generosity and pureness of heart kept Alabama on solid moral and financial ground; and some whose prejudices held back this state when it should have moved forward. The Five Capitals of Alabama paints a dramatic picture of where we began, where we are today, and the twisting journey taken along the way.

Tom Bailey (Author) TOM BAILEY is an author, editor, and former teacher in the creative writing program at Susquehanna University. He has published two novels, a collection of short fiction, and two textbooks on writing short stories. He has also been widely published in anthologies and literary journals including New Stories from the South and DoubleTakes. The latter published his short story, "Snow Dreams," which was selected for the 2000 The Pushcart Prize anthology and would become the basis for his debut novel, The Grace that Keeps this World. He received a Newhouse Award from the John Gardner Foundation and was awarded a National Endowment for the Arts Fellowship in Fiction. Art Meripol (Photographer) Art Meripol is a photographer based in Birmingham, Alabama. His projects include the guide book Alabama Barbecue-Delicious Road Trips and the National ADDY Award-winning What Happened Here Changed the World. That book, documenting historic Civil Rights sites across the South, was recently presented to the board of UNESCO with the aim of gaining a World Heritage Site designation for the Civil Rights Trail. He also completed all the photography for the trail's website: https: //civilrightstrail.com