The Usefulness of the Useless (Paperback) 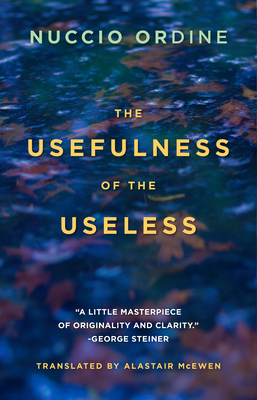 "A little masterpiece of originality and clarity."--George Steiner "A necessary book."--Roberto Saviano "A wonderful little book that will delight you."--Fran ois Busnel International Best Seller / Now in English for the First Time In this thought-provoking and extremely timely work, Nuccio Ordine convincingly argues for the utility of useless knowledge and against the contemporary fixation on utilitarianism--for the fundamental importance of the liberal arts and against the damage caused by their neglect. Inspired by the reflections of great philosophers and writers (e.g., Plato, Dante, Montaigne, Shakespeare, Borges, and Calvino), Ordine reveals how the obsession for material goods and the cult of utility ultimately wither the spirit, jeopardizing not only schools and universities, art, and creativity, but also our most fundamental values--human dignity, love, and truth. Also included is Abraham Flexner's 1939 essay "The Usefulness of Useless Knowledge," which originally prompted Ordine to write this book. Flexner--a founder and the first director of the Institute for Advanced Study in Princeton--offers an impassioned defense of curiosity-driven research and learning. Nuccio Ordine is a professor of Italian Literature at the University of Calabria and one of the world's leading experts on the Italian Renaissance and the philosopher Giordano Bruno. He has taught at Yale, New York University, the Sorbonne, the Ecole Normale Sup rieure Paris, and the Warburg Institute London, among others. Professor Ordine has been named a Knight of the French Legion of Honour, a Knight Commander of the Republic of Italy, and given an honorary membership in the Russian Academy of Sciences. His books have been translated into twenty languages. Abraham Flexner (1866-1959) was an educator and reformer whose work helped transform higher education throughout North America. He was the founding Director of the Institute for Advanced Study in Princeton, NJ, one of the world's leading centers for intellectual inquiry and research.

Nuccio Ordine is a professor of literature at the University of Calabria, and is an expert on Giordano Bruno.