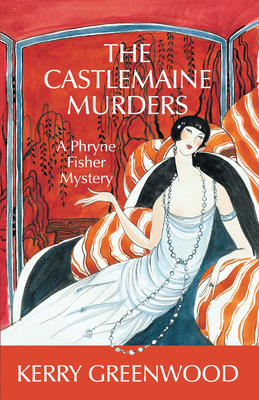 This is book number 13 in the Phryne Fisher Mysteries series.

"An unforgettable character, with a heart as big as her pocketbook, a fine disregard for convention and an insatiable appetite for life." —Denver Post

The fabulous Phryne Fisher, her sister Beth and her faithful maid, Dot, decide that Luna Park is the perfect place for an afternoon of fun and excitement with Phryne's two daughters, Ruth and Jane. But in the dusty dark Ghost Train, amidst the squeals of horror and delight, a mummified bullet-studded corpse falls to the ground in front of them. Phryne Fisher's pleasure trip has definitely become business.

Digging into this longstanding mystery takes her to the country town of Castlemaine where it's soon obvious that someone is trying to muzzle her investigations. With unknown threatening assailants on her path, Phryne seems headed for more trouble than usual....

"Greenwood weaves historical data into the plot like gold thread, giving it richness without weighing it down. As always, the highlight of the series is the sexy and sybaritic Phryne, whose kind heart and generous spirit far outweigh her slightly scandalous behavior." --Booklist

"the appealing characters and witty banter make for an enjoyable caper" --Publisher's Weekly   "Greenwood's prose has a dagger in its garter; her hero is raunchy and promiscuous in the best sense."
--The Weekend Australian   "The success of Jacqueline Winspear's Maisie Dobbs books may help pave the way for Phryne Fisher, who is an equally unforgettable character, with a heart as big as her pocketbook, a fine disregard for convention and an insatiable appetite for life." --Denver Post