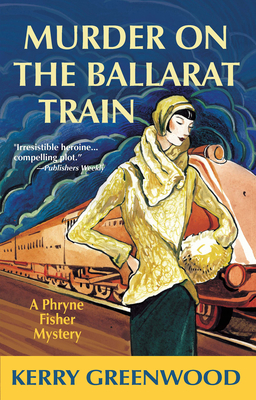 This is book number 3 in the Phryne Fisher Mysteries series.

From the author of the bestselling Phryne Fisher Series comes Murder on the Ballarat Train, the next historical mystery featuring the intrepid amateur sleuth Phryne Fisher. What happens when this train reaches its deadly destination? Phryne is determined to find out…

"Greenwood's stories are brief, but she holds her own, writing well-thought-out plots starring the intelligent, sexy, liberated, and wealthy Phryne."—Library Journal

Looking for the perfect historical murder mystery novels? This series hits all the sweet spots:

Perfect for fans of Jacqueline Winspear and Dorothy Sayers

When the roaring 1920s' most glamorous lady detective, the Honourable Miss Phryne Fisher, arranges to go to Ballarat for the week, she eschews the excitement of her red Hispano-Suiza racing car for the sedate safety of the train. The last thing she expects is to have to use her trusty Beretta .32 to save the passengers' lives. As they sleep, they are poisoned with chloroform.

Phryne is left to piece together the clues after this restful country sojourn turns into the stuff of nightmares with a young girl who can't remember anything, rumors of slavery and black magic, and the body of an old woman missing her emerald rings. Unlike typical 1920s books, Phryne dives right into the fray, convention be damned. Will she be able to derail this mystery train before it's too late? Then there is the rowing team and the choristers, all deliciously engaging young men. They're a pleasant diversions, but they seem to be up to something...