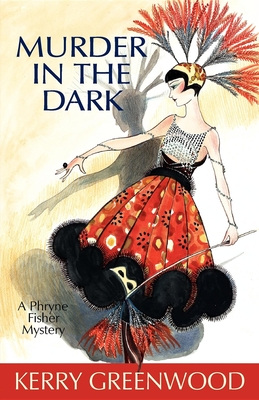 This is book number 16 in the Phryne Fisher Mysteries series.

It's Christmas, and Phryne has an invitation to the Last Best party of 1928, a four-day extravaganza being held at Werribee Manor house and grounds by the Golden Twins, Isabella and Gerald Templar. She knew them in Paris, where they caused a sensation. Phryne is in two minds about going. But when threats begin arriving in the mail, she promptly decides to accept the invitation. No one tells Phryne Fisher what to do. At the Manor House, she is accommodated in the Iris room, and at the party dallies with two polo-playing women, a Goat lady (and goat), a large number of glamorous young men, and a very rude child called Tarquin. The acolytes of the golden twins are smoking hashish and dreaming. The jazz is as hot as the drinks are cold. Heaven. It all seems like good clean fun until three people are kidnapped, one of them the abominable child, and Phryne must puzzle her way through the cryptic clues of the scavenger hunt to retrieve the hostages and save the party from further disaster.

“The sixteenth Fisher novel has all the qualities of its forerunners: a snazzy, jazzy, outspoken heroine; a cast of engaging supporting players; and a sharply plotted mystery. As usual, too, the author vividly creates the setting—1920s-era Melbourne—and really makes us feel as though we’ve spent some time there. Another strong entry in a consistently entertaining series.” –Booklist of Murder in the Dark   “One of the most exciting and dangerous of the adventures into which Phryne's fabulous and risky lifestyle have led her.” –Kirkus Reviews of Murder in the Dark   "Australian author Greenwoodas fine Phryne Fisher mystery combines suspense and humor with a taut race to unmask a master assassin before he can strike again. The irrepressible and defiantly unflappable Phryne Fisher decides to attend a lavish four-day celebration in Melbourne, athe Last Best Party of 1928, a despite anonymous and deadly warnings to keep away, which include a coral snake. One of the partyas hosts, Gerald Templar, becomes worried after Tarquin, the orphan boy heas adopted, disappears. The connection between Tarquinas vanishing and the escalating acts of violence from the killer who calls himself the Joker is far from obvious, and Fisher has no shortage of suspects to consider among the eccentric guests, including a man whoas modeled himself on Oscar Wilde. The Jokeras identity will surprise many readers, but as usual for this long-running series (/Cocaine Blues/, etc.), the major pleasures come from Greenwoodas wry voice and the larger-than-life Fisher." -- Publishers Weekly of Murder in the Dark