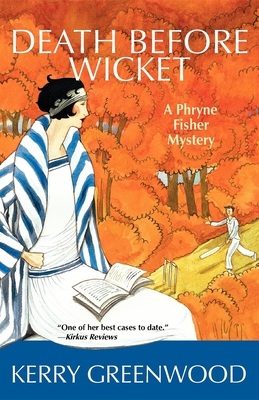 This is book number 10 in the Phryne Fisher Mysteries series.

"Phryne's fans get everything they could possibly want from this installment in the long-running and ever more popular series: a fast-talking, tough heroine; an engaging cast of supporting players; a couple of really nifty mysteries; and plenty of fun." —Booklist

Phryne Fisher is on holiday. She means to take the train to Sydney (where the harbour bridge is being built), go to a few cricket matches, dine with the Chancellor of the university, and perhaps go to the Arts Ball with that young modernist, Chas Nutall. She has the costume of a lifetime, and she's not afraid to use it.

When she arrives there, however, her maid Dot finds that her extremely respectable married sister Joan has vanished, leaving her small children to the neglectful care of a resentful husband. What has become of Joan, who would never leave her babies? Surely, she hasn't run away with a lover, as gossip suggests?

Then while Phryne is visiting the university, the very pretty Joss and Clarence ask her to find out who has broken into the Dean's safe and stolen a number of things, including the Dean's wife's garnets and an irreplaceable illuminated book called the Hours of Juana the Mad. An innocent student has been blamed.

So Phryne girds up her loins, loads her pearl-handled .32 Beretta, and sallies forth to find mayhem, murder, black magic, and perhaps a really good cocktail before more crime erupts in Sydney.

"The change of scene and a hint of Dorothy L. Sayers gives the delightfully refreshing Phryne one of her best cases to date." --Kirkus Reviews

"This series is the best Australian import since Nicole Kidman, and Phyrne is the flashiest new female sleuth in the genre."  --Booklist starred review of Away with the Faeries